English language metaphors are “as old as the hills” – or 13 centuries old at the very least – researchers at the School of Critical Studies at the University of Glasgow have found.

They have just completed a three-year-long project which traces metaphor over the entire history of the English language, creating the first ever Metaphor Map resource which contains the thousands of metaphorical connections that the researchers have identified.

“This project is unique in its scope. While a considerable amount of work on metaphor has been done over the past 40 years, it has never been possible to achieve this level of comprehensiveness until now,” said Dr Wendy Anderson, Principal Investigator on the “Mapping Metaphor with the Historical Thesaurus” project.‌‌ 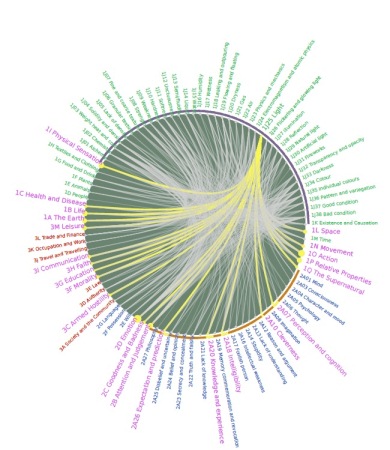 “These findings support the view that metaphor is pervasive in language and a major mechanism of meaning-change,” said Dr Anderson.

“This helps us to see how our language shapes our understanding – the connections we make between different areas of meaning in English show, to some extent, how we mentally structure our world,” she added.

“Over the past 30 years, it has become clear that metaphor is not simply a literary phenomenon; metaphorical thinking underlies the way we make sense of the world conceptually. When we talk about ‘a healthy economy’ or ‘a clear argument’ we are using expressions that imply the mapping of one domain of experience (e.g. medicine, sight) onto another (e.g. finance, perception).

“When we describe an argument in terms of warfare or destruction (‘he demolished my case’), we may be saying something about the society we live in. The study of metaphor is therefore of vital interest to scholars in many fields, including linguists and psychologists, as well as to scholars of literature.”

The Metaphor Map is still a work in progress, but once complete it will also include tens of thousands of examples of words with metaphorical senses; to date, around a quarter of these have been put online.

The researchers plan to launch a parallel Metaphor Map for data from Old English (prior to 1150AD) in August, at the International Society of Anglo Saxonists conference in Glasgow. The team, led by Dr Anderson and Research Associate Dr Ellen Bramwell, is also working on another project, “Metaphor in the Curriculum”, to create materials on metaphor for schools. This is funded by the AHRC’s Follow-on Funding for Impact and Engagement strand.

Facts and figures
• The Historical Thesaurus of English, the source data for the Metaphor Map, contains 793,742 word senses, grouped into nearly a quarter of a million categories;
• The Metaphor Map has 415 categories e.g. excitement, anger, light, literature, the sun, which are grouped into 37 higher-level categories and three top-level categories – external world, mental world, and social world;
• The researchers have manually analysed around 4 million pieces of lexical data, alongside other data relating to dates of usage and word senses.

Dr Wendy Anderson: "Light and Darkness are fundamental to the way we view the world. The contrast between them is exploited in some interesting and important metaphorical connections.
We use metaphors of Light to talk about Intelligence. For example, people are described as bright or brilliant. We also talk about someone being enlightened and even have the Enlightenment as an intellectual movement. On the flip side of this metaphor, Darkness is represented as a lack of intelligence or knowledge – a person can be dim or even unilluminated.

"Some examples of the cluster of Light words we have crossing over into the realm of Intelligence: reflection, vivid, enlightened, light, luminary, shine, lustre, glaring, clear, gleam (e.g. 1854 H. Rogers Ess. II. i. 2 Like the other great luminaries of philosophy and science, Locke has shone on with tolerably uniform lustre. (quotation from Oxford English Dictionary 2nd Edition)).

"We also think of Light as being fundamentally good in contrast to ‘bad’ Darkness. Our analysis found lots of links between words for darkness and negativity or even evil. This again contrasted with ‘good’ light which tended to correspond with things like positive emotions and things we judge to be good things, such as beauty. ‘Juliet is the Sun’ is the classic Shakespearean example of this."