Cropped: scientists plan to cut insect pests down to size by turning their own hormones against them

Locusts are certainly not among the lazier creatures on earth. They can travel 130km a day in search of food. The insects can strip bare a field of crops in minutes as they move from one feast to the next in vast swarms of up to several hundred square kilometres in size.

However, scientists are hoping to develop new, eco-friendly pesticides that will render these ravenous eating machines, along with other pest insects, less destructive.

The economic cost of pests is extremely difficult to estimate but biological threats such as insects and disease account for around 40% of all crop losses globally. By 2017 the world is expected to spend more than $65 billion annually on pesticides . 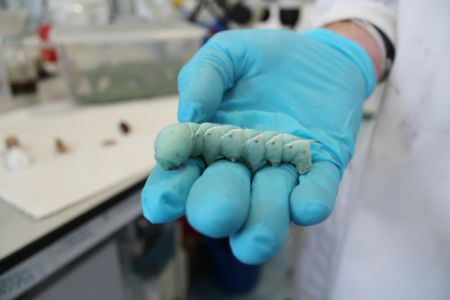 A new €7m European grant will see a large international collaboration led by the University of Glasgow focus on the development of artificial neuropeptides – small protein-like molecules which help the brain and tissues communicate with each other.

The pests being targeted in this study include: moths, locusts, aphids, flies and beetles, which either damage crops directly through eating, or by spreading plant viruses.

The scientists plan to turn the pest insects’ own hormones against them to alter their behaviour or physiology – for example, their circadian rhythms or appetite – while taking care not to harm beneficial insects.

The scientists will be exploring different ways of influencing these systems in order to impair the insects’ ability to inflict damage, including:

Professor Shireen Davies, of the Institute of Molecular, Cell & Systems Biology at the University of Glasgow who is coordinating the project, said: “Insects are the most diverse Class of life on earth, and different insects can be essential for, or highly damaging to, agriculture, horticulture and forestry.

“There is a pressing need, not just for new insecticides to combat resistance in pests, but for more specific, ‘greener’ insecticides that target damaging insects while sparing beneficial ones.”

An External Expert Advisory Board comprising four members from industry based in Germany and the USA, as well as government agencies from Belgium and the USA and American academics are also involved. The project, funded through Horizon 2020 – the EU’s research and innovation fund – will get underway in June and run for four years.

Prof Davies said: “We have assembled an international consortium with unparalleled experience in insect biology, together with agricultural, horticultural and forestry end-users, agencies and advisors who will ensure relevance to user need.

“We will set out to exploit and implement our results to impact three major economic sectors in the EU and globally.”

Professor Julian Dow, who is also working on the project at Glasgow, said: “A big reason for the emergence of pest insects is climate change which is driving the spread of ‘alien’ pests to parts of the world where they wouldn’t normally be found.

“We must also remember that, in many ways, these insects are only a major problem because of the way we farm.

“Until recently the default position was to simply obliterate the insects with pesticides. Now we are more focused on reducing the population of pests which we mustn’t forget have their own place in the eco-system.

“Neuropeptide-based insect control agents should be greener than current pesticides and may not cause resistance in insects.”

Aphids – Acyrthosiphon pisum, world-wide native agriculture pest and a model with sequenced genome for horticulture pests including Macrosiphon rosae, which is detrimental to roses, apples and pears in the vital South African fruit industry and the same species as the green rose aphid in Europe; and Myzus persicae, a world-wide agricultural and horticultural pest which favors ready transport on plant material.

Beetles – some species are also pests and include the flour beetle, Tribolium castaneum (pest of stored grain) and pine weevil (Hylobius abieti), a long-term native pest of spruce and pine, severely affecting forestry production and causing significant financial losses in the EU.