Grey squirrels have been described as one of the ‘world’s worst invasive species’ and have caused a decline in indigenous red squirrel populations and damaged forestry in the UK.

Now the role of this invasive species in hosting the bacteria which causes Lyme disease in humans has come under the spotlight in a study by ecologists at the University of Glasgow. 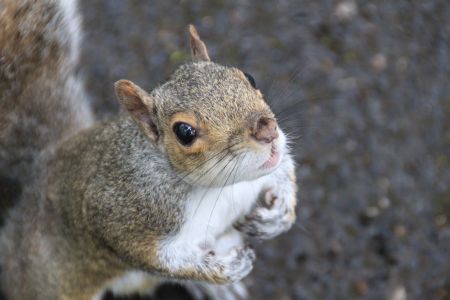 In Britain, Lyme disease is caused by four species of the bacteria Borrelia burgdorferi sensu lato. These bacteria are maintained in a tick-wildlife cycle and a bite from an infected tick is responsible for Lyme disease in people.

In the UK, the main tick species which transmits Lyme disease, Ixodes ricinus, is commonly known as the deer or sheep tick. Around 4% of ticks in the UK are infected, though this can vary substantially between different areas. Species of Borrelia bacteria can infect a number of wildlife species, but generally birds and rodents are considered to be the most important hosts, while deer are important for maintaining tick populations but do not become infected with the bacteria.

Caroline Millins, of the Institute of Biodiversity, Animal Health and Comparative Medicine and lead author of the study published in Applied and Environmental Microbiology, a journal published by the American Society for Microbiology, said: “Grey squirrels are abundant and widely distributed in the UK, so we were interested in finding out how this invasive species may contribute to maintaining the bacteria which causes Lyme disease in humans.”

Grey squirrels could act as an alternative host for ticks. Based on other studies of invasive species, they may either increase or decrease the number of infected ticks in the environment, an important risk factor for human infections.

The researchers tested 679 squirrels from across Scotland and the North of England in 2012 and 2013. They found that grey squirrels often carried ticks, and could be infected with all four of the Borrelia species found in the UK. Around 12% of the collected squirrels were infected, and surprisingly, the most frequent infection was a species usually found in birds.

Miss Millins said: “Frequent infection of grey squirrels with bird strains of Borrelia was unexpected, and challenges our current understanding of host pathogen interactions for this zoonotic pathogen.

“We found quite different patterns and duration of infection in grey squirrels compared to native woodland rodent species. Grey squirrels become infected with whichever strains are circulating in the local area, and our models suggest that the duration of infection isn’t life-long. In contrast, native rodents tend to develop chronic lifelong infections with strains of Borrelia that have adapted to these hosts.

“We can't say from this study whether grey squirrels lead to an increase or decrease in the number of ticks infected with Borrelia species in an area, but we have produced comprehensive baseline data that future studies could use to investigate this.”

Grey squirrels were introduced to the UK between 1876 and 1929 and are regarded as a pest species under national legislation.

Lyme disease was first diagnosed in Old Lyme, Connecticut, in the US, in 1975. The most common symptom is a distinctive skin rash which has a ‘target’ or ‘bull’s eye’ appearance. Patients can also have flu-like symptoms, including a headache and muscle pains. Symptoms can start within 3–30 days of an infected tick bite.

The best way to prevent Lyme disease is to check yourself for ticks as soon as possible after walking or cycling in known tick areas. Ticks should be removed carefully with tweezers, or ideally with a tick remover available from most veterinary clinics. For more information on tick prevention go to Borreliosis and Associated Diseases Awareness UK http://www.bada-uk.org/

The research was funded by the BBSRC, Glasgow Natural History Society, the Wellcome Trust and the Society of General Microbiology.