The Football Fans in Training (FFIT) programme – a men-only weight loss and healthy living programme delivered in Scottish professional football clubs – has been acclaimed internationally for its success. But if a man wants to change his lifestyle – by eating differently or exercising more for example –what is this like for other people around him?

How can family members, such as men’s partners or mothers, support men in making changes?

And are there some things about which they may find it difficult to be supportive?

A team of researchers from the University of Glasgow’s Institute of Health and Wellbeing – the same group who devised and evaluated the FFIT programme – has now published an analysis of how men who participated in FFIT talked about the support they received from female family members. The research was funded by the Medical Research Council.

The Herald: "Hearty meals from mothers cook up trouble for dieting sons" 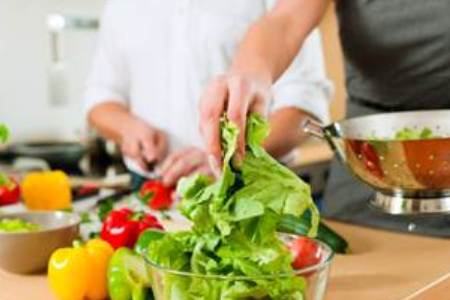 “How do men’s female relatives feature in their accounts of changing eating practices during a weight-management programme delivered through professional football clubs?” , published in The International Journal of Men’s Health, investigated how men talked about the women in their families when it came to their modifying their eating practices.

Dr Alice Maclean, of the MRC (Medical Research Council) & CSO (Chief Scientist Office) Social and Public Health Sciences Unit at the University of Glasgow, said: “Most, but not all, men described how, before they took part in FFIT, food shopping, preparation and the portion sizes served, had generally been up to their partners. Many hoped that their partner would support them in making the dietary changes they needed to help them lose weight. Some suggested their wives or partners had been hoping for a long time that they would make these changes, reflecting perhaps the stereotypically important ‘caring’ role that many women still play in the health of their families.”

The FFIT programme encouraged men to be more involved in practical aspects of their food consumption, such as buying food. Participants were taught how to make sense of food labels and to use this knowledge when taking part in the household food shop.

Post-FFIT, men said they were more likely to read food labels for fat and calorie content; had increased their consumption of meals cooked from scratch and their involvement in cooking meals; chose healthier options over higher-fat foods; and had changed some of their previous “bad” habits, such as finishing off leftovers.

The process of making changes to their eating habits usually involved negotiation between men and others in their families. The researchers identified a number of typologies which characterise the way men described the reactions of female family members:

Women as “facilitative allies”: the majority of the men described how their partners had helped them make changes to their food and eating practices which, in turn, helped them to lose weight. Some women had simply taken an interest in the man’s progress and encouraged them, others actively joined in and made changes to their own diet and lifestyle.

• “… wife’s pretty supportive. She likes to eat, you know, we’ve always eaten quite healthily, but it’s just the portion size, cutting that back you know, saying, ‘just four potatoes, please’. You know, ‘just the one pork chop, thank you. Plenty veg if you don’t mind’.”

Women as “detached allies”: a smaller number of men described their partner’s reactions as neither being active in helping them make changes nor preventing them from making changes.

• “...my partner’s with me sort o’ the, part o’ the way, you know she’ll eat the salads ‘n’ eat what I’m eatin’ most o’ the time, you know, but I’ll still see her comin’ through after I’ve went through and sat down wi’ my pint o’ water, she’ll come through wi’ the chocolate. (Laughter) The chocolate on her lips [...] so obviously she will snack when I’m not there which helps me because obviously I don’t see it.”

Women “undermining change”: a few men talked about ways in which they felt that their partner had sometimes undermined their efforts to make changes – either by not keeping temptation far enough out of their way or by questioning the changes they had made.

• “… sometimes my wife’ll maybe open a bottle of wine and, you know, I’ll be kind of undermined, you know, by that. And really, you know, it was, if I was doing it myself I probably wouldn’t have it, but sometimes I’ll say ‘no’, you know, ‘I don’t want it,’.”

Women “resistant to change through wanting to feed”: a small number of men talked about how their mothers and mothers-in-law unwittingly undermined their efforts because of deeply ingrained cultural values about how best to feed and to show their love and concern for family members. This meant they continued to serve what they considered to be “man-sized” portions and make favourite treats (like a pudding) which the men found it hard to refuse.

Deliveries of Football Fans In Training are organised through the Scottish Professional Football League Trust and delivered free of charge to participants by SPFL clubs’ community coaching staff employed by clubs trained over two days by the research team. It is delivered to groups of up to 30 overweight/obese men over 12 weekly sessions at the club’s home stadium. A randomised controlled trial has shown that it is effective in supporting men in losing weight up to 12 months after joining the programme.

New FFIT programmes are available to men in Scotland through 26 professional clubs over the coming season. Each 90-minute FFIT session combines a physical activity session led by the coaches with a “classroom” session which covers advice on healthy eating, teaches behaviour change techniques known to be effective in physical activity and dietary interventions, and promotes social support.

A number of factors were found to have attracted men to FFIT: growing health concerns and wanting to lose weight to “be there” for family, and the “draw” of taking part in a programme delivered at the football stadia. FFIT has been extremely popular with the men who have done the programme.