Under-appreciated marine life and landforms are enjoying a rare moment in the spotlight thanks to a new education project from the University of Glasgow.

While many people are aware of the role the sea plays in shaping our coastlines via weathering and erosion, fewer understand the vital contribution of creatures such as limpets, boring worms and seaweeds which eat, drill into and protect rocky shores. Wildlife that helps shape shores can be thought of as ecosystem engineers. They interact with geology, the sea and climate to shape majestic landforms like rock pools and sea arches.

Bioprotection of coastal rocks and structures

The fold-out, double-sided guide offers a range of educational activities for beach visitors to develop their knowledge of biogeomorphological processes. Biogeomorphology is the study of the interplay between plants and animals and the landscape, as well as how geomorphic processes (e.g., running water, ice, wind, wave action and landslides) affect the distribution of plants and animals.

On one side of the guide, readers are encouraged to think of seaside rocks and wildlife like a cake in order to more easily understand the effects of the rocks’ inhabitants on shaping the landforms you see at the coast. Limpets and snails graze for food on the surface of the cake with their hard mouth parts, shaping it over time. Worms, piddocks, bacteria and tiny algae bore into it, creating tiny holes and tunnels, making the cake (i.e. rocks your shore is made of) more porous. Barnacles provide a thick icing, protecting it from the elements which reduces how quickly the rocks are eroded.

The middle spread of the guide allows users to test the hardness of rocks by scratching them with a fingernail, penny or key. This helps match the rock type to the wildlife to that may be found on any UK rocky shore, demonstrating a strong link between geology and the wildlife they will find. Users can use this test to determine which of nine common seaside rock-dwellers they are likely to find.

At the back of the guide, there is a series of activities to extend their learning on the beach and at home, including using the species cards to play Who’s Who and memory games. 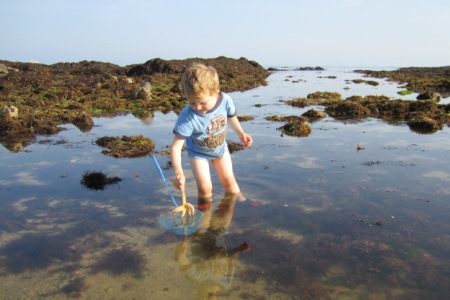 Dr Larissa Naylor, of the University’s School of Geographical and Earth Sciences, developed the guide in partnership with the Universities of Exeter, Oxford and Plymouth and the Marine Biological Association with funding from the Esmée Fairbairn Foundation.

Dr Naylor said: “Exploring rock pools is a popular family activity. While there are many guides to identifying seashore life available to beach visitors, Shore Shapers is the only one that addresses the complex interaction between biology, geology and geomorphology. These processes, together with the sea and climate, create the diversity of rock coast landforms we see around Britain.

“We’ve worked hard to ensure it’s also a fun way to explore the beach and think about seaside rocks in a different way. We’re hoping that anyone who uses it will leave the beach with a better understanding of the forces which create our rocky shores.”
Initial feedback on the guide has been overwhelmingly positive. A survey of 77 people (36 children aged under 16 and 41 adults) conducted using a draft version of the guide showed that 82% of participants thought they had a better understanding of how rock pools form and change over time, after seeing the guide. Ninety percent surveyed found some species more interesting than they had previously thought, with limpets and boring worms voted the most interesting.

“We’re also trying to address a gap in educational understanding which often persists into university. It’s not unusual to see undergraduate species identification textbooks which have little or no material on how marine biology helps shape the physical habitat,” said Dr Naylor.

Matt Keyse, OPAL National Schools Officer with the Field Studies Council, said: “Shore Shapers gives a wonderful new perspective on how we look at the sea shore, highlighting the fascinating interactions between geology, geomorphology and the ecosystems on the coast. I am excited about its potential and look forward to using it with many learners in the future.”

“Geological and geomorphological processes are often ignored when it comes to raising awareness of marine ecology and marine educators have often found such subjects hard to incorporate into their teaching,” she said.

“This Shore Shapers guide is a fantastic resource that we can use to get children and the public excited about seaweed and other overlooked organisms! We trialled the guide with volunteers and local families on a recent rockpool ramble and it made such a difference to their knowledge and understanding of how our rocky shore was formed to allow such a diversity of marine life to thrive here. We very much look forward to using the guide on more events!” she added.