Gorges cut by rivers under ice

A group of researchers has been able to shed new light on the rate of erosion by rivers under ice sheets in parts of the world likely to be covered by future ice sheets that might be considered as potential deep repositories for nuclear waste.

The international team, led by the University of Glasgow’s School of Geographical and Earth Sciences, found that deep gorges, cut like notches in broad glacial valleys in northern Sweden, had been eroded in only a matter of centuries by rivers of pressurised meltwater flowing beneath ice sheets during a period of ice sheet decay. 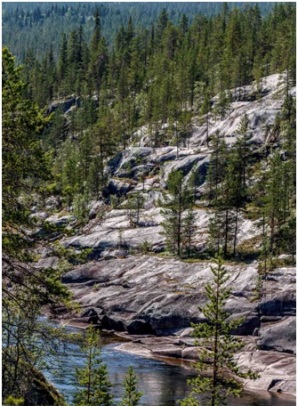 The research, led by Dr John Jansen, with Dr Derek Fabel and Dr Alexandru Codilean is published in the journal Nature Communications. It suggests that a shift in thinking is required about how landscapes evolve under ice sheets.

The research team is an international collaboration of 10 scientists from Australia, Germany, Sweden, Switzerland, UK and the USA, and consists of geomorphologists who specialize in understanding how rivers and glaciers work. It also includes geochemists and physicists who measure cosmogenic radionuclides, such as beryllium-10, in an accelerator mass spectrometer — a machine that counts atoms in order to assess the age of rock surfaces.

The team measured cosmogenically-produced beryllium-10 in bedrock surfaces within seven gorges in northern Sweden, a region covered by the continental-scale Fennoscandian ice sheet during the last ice age. Their results show that the gorges emerged fully formed from under the retreating ice 10,000 years ago. This implies that the gorges were formed by “rivers under ice” and not by the “postglacial” rivers flowing through the gorges since the ice disappeared.

Dr Fabel said: “Understanding the erosional impact of glaciers and ice sheets is an important component in the planning of deep radioactive waste repositories that need to remain sealed for tens to hundreds of thousands of years in countries where future ice-sheets are likely, such as Sweden, Finland, Russia and Canada.

“What is important is that the rate at which these subglacial rivers have eroded the valleys is much faster than rivers do when not underneath an ice-sheet. We also found that the rivers that flowed under the ice sheet did not occupy the same valleys during different glaciations. The implication is that the location of subglacial erosion is not easily predictable, but also that the erosion is not very deep. ” he said.

In Dr Fabel’s opinion, it should therefore still be safe to create repositories hundreds of metres below the ground because ice sheet erosion in similar landscapes as those investigated, although taking place faster than originally thought, is more distributed in nature. Swedish inner gorges were likely to have been cut by subglacial meltwater during Fennoscandian ice sheet decay.