The sonic screwdriver than can turn cells tartan

It’s the sort of thing you would expect Dr Who to do – join up someone’s damaged nerves by using a sonic screwdriver.

But the scientists at the University of Glasgow are no time-travellers and their work is based in a lab – not a Tardis.

Their research, published by the Royal Society of Chemistry’s journal Lab on Chip, shows that cell patterning using a specific kind of sonic screwdriver – a Heptagon Acoustic Tweezer – may soon be in a position to deliver important results. 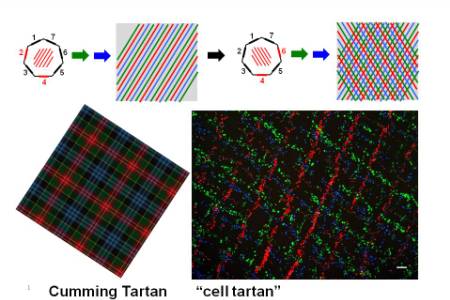 In the field of tissue engineering, it is important to have accurate control over the positioning of cells, but previous methodologies for cell patterning have been found to be either inflexible, limited, or cost- and time-intensive.

Now, however, a team of researchers from a range of disciplines in the University – from engineering to biology – have discovered a novel, electronically-controlled method of generating dynamic cell patterns using a portable device based on acoustic force for spatial manipulation of cells and particles.

Dr Anne Bernassau, a Lord Kelvin Adam Smith Fellow in Sensor Systems, explained that using this sonic device, they were able to manipulate cells into complex assemblies – a “cell tartan”. In addition, the team were able to demonstrate that this cell tartan could aid neurone alignment, which is a preliminary step towards nerve repair. Dr Frank Gesellchen, a research associate in biomedical engineering, played a key role in the laboratory research.

Dr Mathis Riehle, a reader in the Institute of Molecular Cell and Systems Biology, said the researchers’ ambition was to turn what is currently a two-dimensional application into one that is three-dimensional. At that point, he believes it would be possible to create an artificial device containing a person’s own cells that could be used to repair nerve damage more effectively than the current methods of nerve repair tubes or nerve grafts which do not have a high success rate.

The cross-university Sonotweezer team was supported by the EPSRC (Engineering and Physical Sciences Research Council).