The cutting-edge MRC-University of Glasgow Centre for Virus Research is another step closer to completion following the ‘topping out’ of the structure that will house it.

The building on the Garscube Estate, designed by Sheppard Robson, will be formally named the Sir Michael Stoker Building and will put Glasgow at the forefront of international research into human and animal viral disease. 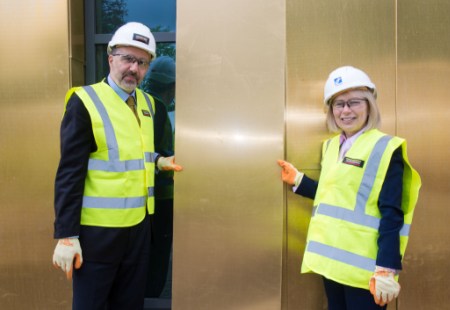 Cutting edge facilities, including state of the art laboratories, insectaries, will create an environment that supports the very best in scientific research and collaboration. The Centre will also include social areas and a café for staff and students and will be accessible, inclusive and sustainable.

Construction partners Laing O’Rourke are erecting the building which is due to be completed in summer 2014.

Professor Massimo Palmarini, Director of the MRC-University of Glasgow Centre for Virus Research, said: “I’m pleased to see construction of the Sir Michael Stoker building progress and to see the structure reach its full height.

“We are eager to move the Centre to a single site and into this new facility which will provide excellent surroundings for our staff and students and be a real boon to our research efforts.”

Steve Irvine, Operations Manager for Laing O’Rourke in Scotland said: “The Sir Michael Stoker Building is a unique building, not just because of the distinctive copper panel façade which gives it a striking appearance, but also because of the high grade laboratories and the services needed to make this a safe, stable environment that enables the university to carry out its research.

“It’s been fantastic to work with the University of Glasgow and the Medical Research Council and the design team on this prestigious project and we look forward to fully handing the building over later this year.”