Sir Fitzroy Maclean was a politician, diplomat, soldier and adventurer. He is also thought to have been the inspiration behind Iain Fleming’s James Bond - and now students at the University of Glasgow are being given the chance to follow in his footsteps thanks to scholarships established in Sir Fitzroy’s name.

Although initially drawn to work in academia, the crisis in Europe in the 1930s convinced Sir Fitzroy to enter the Diplomatic Service. During the decade before the outbreak of the Second World War he travelled extensively and as a diplomat at the British Embassy in Moscow he made several notable journeys to the Caucasus and Soviet Central Asia, often shadowed by NKVD agents, the forerunners of the KGB. 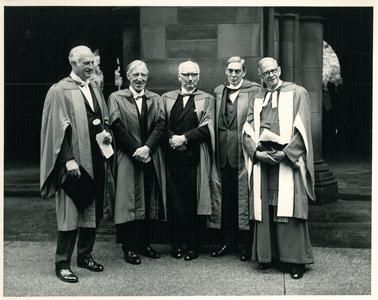 It was from these adventures that his credentials as the basis for Agent 007 were established – a rumour never confirmed nor denied by Sir Fitzroy.

Sir Fitzroy was later elected a Member of Parliament. During World War Two, having joined the Cameron Highlanders, he won further renown for irregular Bond-like exploits in the Western Desert with the fledgling SAS and as Churchill's special envoy to Tito and the Partisans in former Yugoslavia.

The University of Glasgow, together with the Maclean family, will honour Sir Fitzroy’s Memory by offering eight Postgraduate scholarships over four years to students coming to Scotland from those areas he visited and is now honoured  in, including Georgia, Uzbekistan, Moldova, Azerbaijan, Kazakhstan, and the former Yugoslav republics of Serbia, Croatia, Bosnia-Hertzegovina, and Montenegro.

28 travel scholarships will also be available to Glasgow students over this period to support them in undertaking trips to develop an existing skill or learn a new one, in keeping with Sir Fitzroy’s passions.

Sir Charles MacLean, Sir Fitzroy’s son, said: “I am delighted that these scholarships in my father's name will create opportunities for students to keep alive his memory in the boundless  pursuit of knowledge and adventure, best described by  the poet, James Elroy Flecker, who  wrote:  ‘For lust of knowing what should not be known, we make the golden journey to Samarkand.’  Two lines that were the lodestar of Fitzroy Maclean’s life."

Principal and Vice-Chancellor, Professor Anton Muscatelli, said: “These important scholarships will not only be of great benefit to our students but will be a fitting tribute to an outstanding individual who was well known across the continent as a traveler, writer, diplomat and adventurer. It is right that these scholarships should encourage the spirit of travel that Sir Fitzroy so clearly and successfully embraced”.