Secret of the Blarney Stone revealed

The secret of Ireland’s famous ‘Blarney Stone’ has been revealed thanks to the discovery of a possibly unique 19th century microscopic slide cut from the famous rock at Blarney Castle, near Cork.

Said to bestow eloquence, or ‘the gift of the gab’ on anyone who kisses it, the stone which is embedded in the battlements of the castle, is steeped in rumour and myth with little published evidence of its true nature. 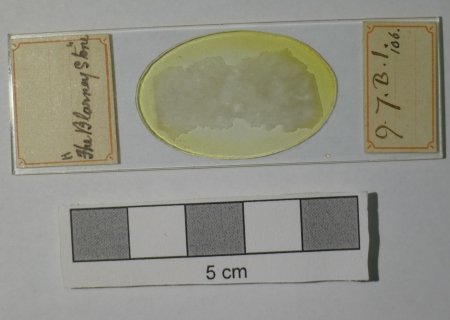 There are various legends about the origins of the stone: an entry on Wikipedia says that it is a ‘bluestone’ like those at Stonehenge.

Elsewhere it’s claimed that it was part of the true Stone of Destiny, given to Cormac MacCarthy by a grateful Robert the Bruce following victory at the Battle of Bannockburn in 1314. Various other accounts suggest associations with Moses, King David, or with the death of St Columba, but there is no clear source for these speculations.

Now geologists at the University of Glasgow’s Hunterian Museum can reveal the true nature of the Blarney Stone after studying the historic microscope slide, containing a slice of the stone ground so thin that it is transparent to light. 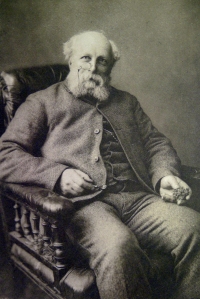 Analysis indicates the Blarney Stone is a limestone, made of the mineral calcite, and containing recrystallized and slightly deformed fragments of fossil brachiopod shells and bryozoans.

Dr John Faithfull, curator at the Hunterian, said: “This strongly supports views that the stone is made of local Carboniferous Limestone, about 330 million years old, and indicates that it has nothing to do with the Stonehenge bluestones, or the sandstone of the current ‘Stone of Destiny’, now in Edinburgh Castle.”

The Hunterian has around 40,000 geological microscope slides, and the older ones are mostly catalogued in hand-written ledgers. The Blarney Stone slide had escaped notice until now, but it was spotted in the catalogues during a digitisation programme being carried out by Becky Smith, a Museums Galleries Scotland funded collections intern.

The slide is part of the rock and mineral thin-section collection put together by Professor Matthew Forster Heddle, of St. Andrews, one of the giants of 19th century geology and chemistry in the UK. 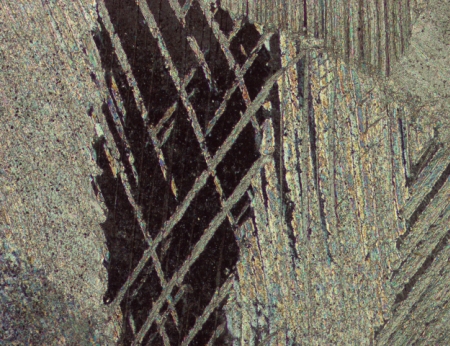 Dr Faithfull said: “It was probably made between 1850 and 1880, during the period when new microscope techniques began to revolutionise our understanding of rocks, and how they form.

“He was a pioneer in the use of these techniques to investigate the rocks and minerals of Scotland, and elsewhere. He also seems to have managed to obtain fragments of a number of important historical stones: the collection also includes slides cut from several of the stones at Stonehenge. This was not vandalism – it was bringing the latest scientific tools to bear on the origins of these monuments.

“We don’t know how Professor Heddle got the Blarney microscope slide, or whether he had it made himself, but he was a major scientific figure, with excellent contacts, and was always keen to acquire interesting samples for scientific investigation. However, in this case, he doesn’t seem to have published anything about the stone.”

During the mid-19th century, Blarney Castle was an uninhabited semi-ruin, but visiting the stone was popular, and Heddle or some other geologist or antiquarian must have collected a sample. At that time, the Stone could only be accessed by hanging upside down from the battlements, so using a hammer to sample the Stone would have been a difficult acrobatic feat.

Dr Faithfull added: “Very few pieces of the Blarney Stone seem to exist outside Blarney Castle. Apart from our microscope slide, the only other one I’m aware of is in a monument at the University of Texas. However, this object seems to have its origins in a beer-fuelled party, and the genuineness of the fragment must be in doubt.

“The Blarney Stone is famous for bestowing the gift of eloquence on those who kiss it. We don’t know if kissing the microscope slide would have the same effect, although I have tried it.”

Images can be downloaded at: http://www.hmag.gla.ac.uk/john/blarney

The width of the field of view is about 1.7mm on each of the microscope images.

The Blarney Stone is practically all made of one mineral – calcite, but some of this calcite is from fossil shell and skeletal material, and some has crystallized later, cementing the fossil fragments together.