Dr Kerry O’Shea, 29, Postdoctoral Researcher at University of Glasgow, won Bronze at a competition in the House of Commons, for the excellence of her physics research, walking away with a £1,000 prize.

‌‌Kerry presented physics research to dozens of politicians and a panel of expert judges, as part of the poster competition SET for Britain, on Monday 17 March. 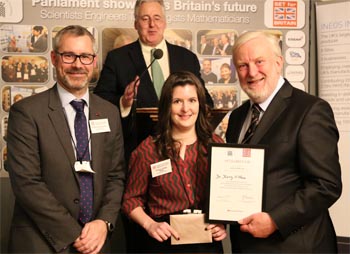 Her research, looking at the smart materials that are likely to be in the next generation of our smart phones, was judged against 29 other shortlisted researchers’ work and came out as one of the three winners.

Kerry said that she was “absolutely delighted” to have been one of the three physics winners.

SET for Britain aims to help politicians understand more about the UK’s thriving science and engineering base and rewards some of the strongest scientific and engineering research being undertaken in the UK.

Dr Frances Saunders, President of the Institute of Physics, said, “SET for Britain is a great opportunity for some of the country’s most impressive scientific talent to show off their research to politicians from across the UK.  I hope every exhibitor feels incredibly proud to have had their research shortlisted, and excited to show it off.”

The Parliamentary and Scientific Committee run the event in collaboration with the Council for Mathematical Sciences, the Institute of Physics, The Physiological Society, the Royal Academy of Engineering, the Royal Society of Chemistry, the Society of Biology and the Society of Chemical Industry, with financial support from BP, the Clay Mathematics Institute, Essar, INEOS, Warwick Manufacturing Group (WMG), Germains Seed Technology, Boeing, the Bank of England and the Institute of Biomedical Science.

Each session will result in the reward of Bronze, Silver and Gold certificates.  Bronze winners will receive a £1,000 prize; Silver, £2,000; and Gold, £3,000.  There will also be an overall winner from the four sessions who will receive the Westminster Wharton Medal.

SET for Britain was established by Dr Eric Wharton in 1997.  Following his untimely death in 2007, the Parliamentary and Scientific Committee, with support from The Royal Academy of Engineering, The Institute of Physics, the Society of Biology, The Royal Society of Chemistry, The Physiological Society and the Society of Chemical Industry, is working to further his legacy.

The event is made possible this year by the prize sponsors, who are BP, the Clay Mathematics Institute, Essar, INEOS, Warwick Manufacturing Group (WMG), Germains Seed Technology, Boeing, the Bank of England and the Institute of Biomedical Science.

The competition is open to early stage or early career researchers, which includes university research students, postgraduates, research assistants, postdocs, research fellows, newly-appointed lecturers, part-time and mature students, returners, those people embarking on a second career, and their equivalent in national, public sector and industrial laboratories, and appropriate final year undergraduate and MSc students, all of whom are engaged in scientific, engineering, technological or medical research.