Researchers from the University of Glasgow’s Boyd Orr Centre for Population and Ecosystem Health were awarded the Queen's Anniversary Prize for Higher and Further Education at a ceremony at Buckingham Palace today (27 Feb). The award commends Centre’s 'outstanding achievement at a world-class level' and was assessed by a specialist panel over several months before being put forward by the Prime Minister to the Queen for Royal Assent. 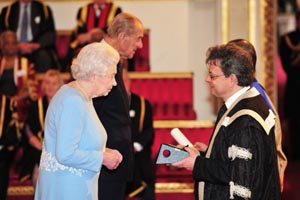 The Centre conducts applied research that addresses the links between human activity, ecological changes and the overall health of ecosystems that include humans, livestock and wildlife.

The award was made for the work addressing the spread of infectious diseases of national and international importance. The research aims to translate laboratory, desk-based and field research into benefits for individuals and communities, informing and improving government policy at home and overseas.

The award also highlights the success of the Centre in building close ties with external research institutions to support major research initiatives, including over £40m in grant income from a diverse array of UK and international funding sources.

The Centre plays a crucial role in fostering collaborations between researchers working across a wide range of areas, including veterinary science, mathematics, ecology, evolutionary biology, physics, engineering, economics and the social sciences.

The Boyd Orr Centre retains a diverse portfolio of activities, including:

Rowland Kao, Director of the Centre, said: “While traditional epidemiology has been successful in studying and controlling many infectious diseases, it is typically focused on solving single disease problems via relatively simple direct measures.

“Many of the world’s most serious infectious diseases are embedded in diverse and complex ecosystems and cannot be effectively addressed in isolation. Our Centre is committed to breaking down traditional boundaries across academia and promoting new research partnerships that have a direct and positive impact on communities around the world.”

Professor Anton Muscatelli, Principal and Vice-Chancellor of the University of Glasgow, said: “I am delighted that the Royal Anniversary Trust has seen fit to honour Boyd Orr Centre for Population and Ecosystem Health with this award. It is testament to the important work that is happening at the University of Glasgow and impacting on the lives of people around the world.”

John Boyd Orr was a visionary researcher, decorated war veteran, Nobel Peace Prize winner, political idealist and activist, and devoted supporter of the University of Glasgow. After fighting in World War I he led the Rowett Institute for Research in Animal Nutrition which conducted world-leading research in the interwar years.

During World War II Boyd Orr's work became progressively more involved in policy development as his own research highlighted the massive problems of malnutrition in Britain during the 1930's, the increasingly serious food shortages that arose during the Second World War. His international work on food supply and nutrition led to his nomination to be the first Director General of the Food and Agriculture Organization in 1945 and in 1949 he was ennobled and awarded the Nobel Peace Prize.