As far back as 1948, Erwin Schrödinger—the inventor of modern quantum mechanics—published the book “What is life?”

In it, he suggested that quantum mechanics and coherent ringing might be at the basis of all biochemical reactions. At the time, this idea never found wide acceptance because it was generally assumed that vibrations in protein molecules would be too rapidly damped.

Now, scientists at the University of Glasgow have proven he was on the right track after all. 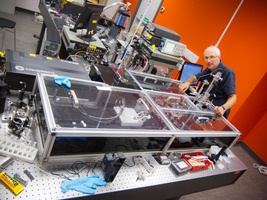 Using modern laser spectroscopy, the scientists have been able to measure the vibrational spectrum of the enzyme lysozyme, a protein that fights off bacteria. They discovered that this enzyme rings like a bell with a frequency of a few terahertz or a million-million hertz. Most remarkably, the ringing involves the entire protein, meaning the ringing motion could be responsible for the transfer of energy across proteins.

The experiments show that the ringing motion lasts for only a picosecond or one millionth of a millionth of a second. Biochemical reactions take place on a picosecond timescale and the scientists believe that evolution has optimised enzymes to ring for just the right amount of time. Any shorter, and biochemical reactions would become inefficient as energy is drained from the system too quickly. Any longer and the enzyme would simple oscillate forever: react, unreact, react, unreact, etc. The picosecond ringing time is just perfect for the most efficient reaction.

These tiny motions enable proteins to morph quickly so they can readily bind with other molecules, a process that is necessary for life to perform critical biological functions like absorbing oxygen and repairing cells.

The findings have been published in Nature Communications.

Klaas Wynne, Chair in Chemical Physics at the University of Glasgow said: “This research shows us that proteins have mechanical properties that are highly unexpected and geared towards maximising efficiency. Future work will show whether these mechanical properties can be used to understand the function of complex living systems.”

College of Science and Engineering

The research was carried out in the Ultrafast Chemical Physics group of Prof Klaas Wynne in the School of Chemistry, WestCHEM at the University of Glasgow in collaboration with Dr David Turton, Dr Hans Senn, and Dr Adrian Lapthorn in the same school and Dr Elizabeth Ellis and Mr Thomas Harwood at the Strathclyde Institute of Pharmacy and Biomedical Sciences, University of Strathclyde. For more information, go to http://www.chem.gla.ac.uk/staff/wynne/.