Pizza Perfect! A nutritional overhaul of ‘junk food’ and ready-meals is possible

Pizza is widely regarded as a fully-paid up member of the junk food gang – maybe even the leader – at least the versions found on supermarket shelves or delivered to your door by scooter.

Historically, a few humble ingredients: bread, tomatoes and a little cheese, combined to form a traditional, healthy meal, but many of today’s pizzas have recruited two dangerous new members to their posse – salt and saturated fat.

However, pizzas and many other nutritionally-dubious foods can be made nutritionally ideal: A crowning example of ‘health by stealth’ according to scientists, who say it is possible to reformulate such foods to achieve public health goals, without upsetting their taste so they remain commercially successful for producers.

Professor Mike Lean, a physician and nutritionist in the School of Medicine at the University of Glasgow, said: “Traditional pizza should be a low-fat meal containing at least one portion of vegetables, so mainly made from ingredients associated with better cardiovascular health. 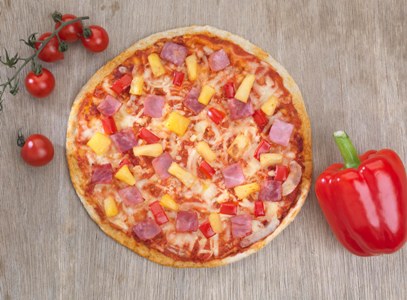 “However, to enhance shelf-life, commercial pizza recipes today include much more fat and salt than desirable. Until now, nobody has stopped to notice that many essential vitamins and minerals are very low or even completely absent. From a nutrition and health perspective, they are hazardous junk.

“Pizzas are widely consumed and regarded as meals in themselves, and yet their impact on human nutrition does not seem to have been studied.”

The team of scientists, which also included Dr Emilie Combet, Amandine Jarlot and Kofi Aidoo of Glasgow Caledonian University, set out to ascertain the nutritional content and quality of contemporary pizzas and to demonstrate that pizza can be reformulated to make it the basis of a fully nutritionally-balanced meal.

Working with Donnie Maclean of food producer EatBalanced.com, a range of new pizza recipes was then developed, each containing 30% of all the nutrients required in a day: in other words, an ideal meal.

A total of 25 Margarita pizzas were analysed. They varied widely in calorie content, ranging from 200 to 562kcal. Few approached the 600kcal energy requirement that would make it a proper meal, so people may tend to eat something extra.

Perhaps surprisingly only six of 25 pizzas tested contained too much total fat (>35% total energy), with eight having too much saturated fat while only two boasting a desirable level (<11% total energy). Most of the fat in the pizzas came from the cheese.

The amount of sodium in most of the 25 pizzas was substantially over the recommended limit, with nine containing more than 1g per 600kcal serving.

Several pizzas had sodium levels well within the recommended limit but were not advertised as low-salt or low-sodium, indicating that recipes can be modified and remain commercially successful.

To constitute a healthy nutritionally-balanced meal, at least 45% of the energy intake should come from carbohydrates. Only five failed to meet this requirement, due to combined high fat and protein contents.

Vitamin and mineral content information was mostly absent from the packaging, with only five providing this information in detail, and three having basic information. None met the recommended value for iron, vitamin C and vitamin A. One met just the iron requirement and two the vitamin C requirement. Vitamin A requirement was met in four pizzas, and only one met calcium requirements.

Prof Lean said: “Some were really bad. While none of the pizzas tested satisfied all the nutritional requirements, many of the requirements were met in some pizzas, which told us it should be possible to modify the recipes to make them more nutritionally-balanced without impacting on flavour – health by stealth, if you like.”

The proportions of bread base to Mozzarella cheese was adjusted to correct the carbohydrate/fat/protein ratios and minimize saturated fat content. After cooking, it was finally analysed in the laboratory.

The team put the end result to a taste test with members of the public and both children and adults gave it the thumbs-up for taste and attractiveness.

Prof Lean said: “There really is no reason why pizzas and other ready meals should not be nutritionally-balanced. We have shown it can be done with no detriment for taste.

“We can’t all make entirely home-made meals, so it’s about time that manufacturers took steps to make their products better suited to human biology, and we have shown then how to do it. Rather than sneaking in additives like salt, they could be boasting about healthier ingredients that will benefit consumers.”

The study ‘Development of a nutritionally-balanced pizza, as a functional meal designed to meet published dietary guidelines’, is published in the journal Public Health Nutrition.

Notes to Editors
The study was supported by a 'First Step Award' (funding from the University of Glasgow and the Scottish Government) between the University of Glasgow and the industrial partner Eat Balanced Ltd. The authors wish to thank Fiona Alexander, UKAS research technician at Glasgow Caledonian University, and the input of Cosmo Tamburro at Cosmo Products Ltd. Posteriori to this project, ML has acted as scientific advisor for Eat Balanced Ltd and received a consultancy fee from the company.