Their system uses simple, cheap detectors which have just a single pixel to sense light instead of the millions of pixels used in the imaging sensors of digital cameras. 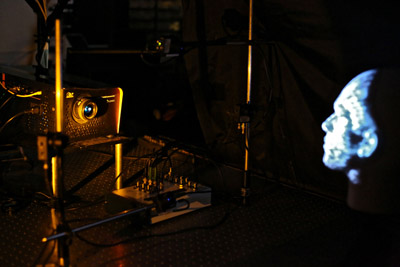 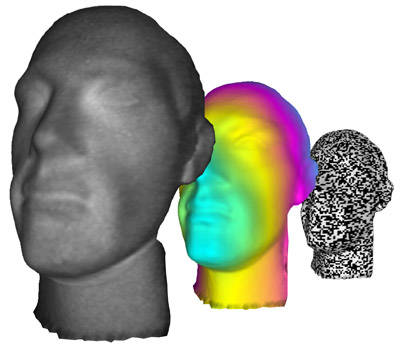 The technology could be used to create much more affordable forms of 3D imaging in the future, By using detectors capable of sensing frequencies beyond visible light, it could even open new possibilities in other fields including medicine and geography.

Researchers from the University of Glasgow’s School of Physics and Astronomy outline the technique in a report published today in the journal Science. Professor Miles Padgett, Kelvin Chair of Natural Philosophy at the University, leads the team of researchers which developed the technique.

Professor Padgett said: “Single-pixel detectors in four different locations are used to detect light from a data projector, which illuminates objects with a rapidly-shifting sequence of black-and-white patterns similar to crossword puzzles. When more of the white squares of these patterns overlap with the object the intensity of the light reflected back to the detectors is higher. A series of projected patterns and the reflected intensities, are used in a computer algorithm to produce a 2D image.

“Four detectors give images, each of which contain shadows, giving us clues about the 3D shape of the object. Combining the four images using a well-known technique known as ‘shape from shade’ allows us to create a full 3D image of the object.

“Conventional 3D imaging systems which use multiple digital camera sensors to produce a 3D image from 2D information need to be carefully calibrated to ensure the multi-megapixel images align correctly. Our single-pixel system creates images with a similar degree of accuracy without the need for such detailed calibration.”

The technique the team use is called 3D computational imaging, or ‘ghost‘  imaging, and the system they have created can produce detailed images of objects in just a few seconds.

One of the primary benefits of using the new technique over more conventional 3D imaging techniques is that there exist single-pixel detectors that can ‘see’ wavelengths far beyond those digital cameras are currently capable of.

Lead author on the paper Baoqing Sun, of the University’s School of Physics and Astronomy, said: “It might seem a bit counter-intuitive to think that more information can be captured from a detector which uses just a single pixel rather than the multi-megapixel detectors found in conventional digital cameras.

“However, digital camera sensors have a very limited sensitivity beyond the spectrum of visible light, whereas a single-pixel detector can easily be made to capture information far beyond the visible, reaching wavelengths from X-ray to TeraHertz.

“This means that single-pixel detectors which cost just a few pounds each are now capable of producing images across a far wider spectrum than 3D imaging systems currently on the market which cost tens of thousands of pounds.”

The system’s unique capabilities and low cost could make it a valuable tool for a wide range of industries.

Research assistant Matthew Edgar, who contributed to the paper, said: “A more portable version of the system could be created quite easily, making it much more practical to use outside the lab. It could be used to look for the telltale gases which leak from the ground where oil can be found, for example, or it could be tuned into the terahertz range to probe just below the skin to search for tumours or other medical conditions.

“We plan to continue working on the system and perhaps working with commercial partners to bring a version to market in the future.”

The team’s paper, ‘3D Computational Imaging with Single-Pixel Detectors’, is published in Science.