The two institutions will offer a four-year BEng (Honours) in Electronic and Electrical Engineering delivered at UESTC’s Qingshuihe campus in Chengdu, Sichuan with around 200 students starting in September 2013. Graduates will receive degrees from both universities. 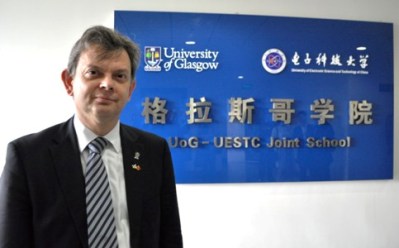 UESTC is renowned as the birthplace of the national electronics industry in China and is one of the institutions chosen by the Chinese Government to be developed as one of the country’s top 100 universities.

The collaboration further strengthens Glasgow’s links with UESTC which began in 2009 with joint research and student mobility activity, and will enhance the University’s reputation in China.

It will also create a base for greater research collaboration with local industry in the province, which has already seen Glasgow license patented microwave ignition technology for engines to Sichuan Dehong Electronics Technologies Company. Future development work on the technology is planned with UESTC which could see the technology, which increases the efficiency of motor engines by up to 50%, made available commercially.

The joint programme was officially launched at a ceremony on 16 May at UESTC’s new Qingshuihe Campus, where a nameplate was unveiled by Professor Anton Muscatelli, Principal and Vice-Chancellor of the University of Glasgow and Professor Li Yanrong, President of UESTC. 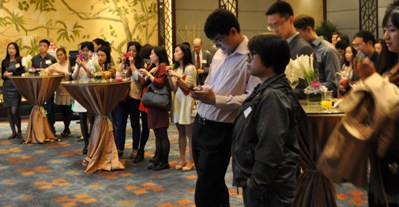 Professor John Chapman, Head of the College of Science & Engineering at the University of Glasgow, said: “The University of Glasgow’s collaboration with UESTC is now entering a new and exciting phase. UESTC is the birthplace of electronics in China and the School of Engineering at Glasgow is the oldest and one of the best in the UK so this is the coming together of two great organizations.

“We are very excited to be working with our Chinese colleagues on this new jointly-delivered programme and taking our partnership to the next level.”

Professor Muscatelli said: “Building long-term, mutually-beneficial partnerships in China is a key part of our internationalisation strategy, and increasing our trans-national education provision is an important element of that.

“There is a huge thirst for education in China and a burgeoning research scene. Creating links with leading research institutes in China not only enhances our educational links but also helps develop greater collaborative research projects with industry which will be of benefit to the wider Scottish economy.” 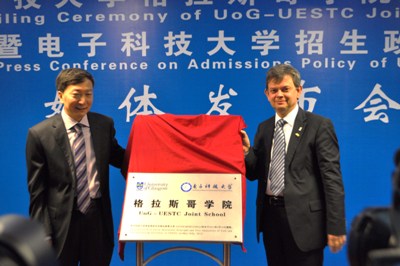 Professor Wang Houjun, Vice President of UESTC, said: “The collaboration will upgrade the education quality at UESTC through introducing the education theory from a world-renowned university and enhance our reputation in the world through adapting our methodology to international practice.”

Professor Li Yanrong said: “Internationalization is one of the three development strategies at UESTC. Cultivating high-end talents with international competitiveness is an important element of that. It is definitely efficient to develop joint education program with University of Glasgow. Based on the mutual understanding through working closely on the joint education program, both sides aspire to collaborate on scientific research.”

The launch event was followed by a University of Glasgow alumni and VIP dinner at the Shangri-la Hotel in Chengdu.

Renowned as China’s birthplace for the national electronic industry, the University of Electronic Science and Technology of China (UESTC) is situated in the city of Chengdu, the capital of Sichuan Province in Southwest China. UESTC was founded in 1956 through the combination of the electronic divisions of three well established universities; Shanghai Jiaotong University, Nanjing Institute of Technology and South China Institute of Technology. UESTC became the one of the China’s key universities in 1960, and is one of the seven earliest universities in national defence. In 1997 it was included as one of the first universities in ‘Project 211’, a project in China for developing 100 first-class universities and a number of key fields of research for the 21st century. In 2001, UESTC was admitted into the nation’s ‘Project 985’, a project aimed at supporting the development of world-class research-orientated universities.  During the past fifty years UESTC has evolved from a University specialising in electronic information, to a key multidisciplinary university with electronic science and technology as its nucleus, engineering as its major field and an integrated approach to science, engineering, management and liberal arts.