Computer scientists have made a working model of multi-million pound cloud computing technology using just Lego bricks and a handful of £20 mini-computers.

The University of Glasgow’s Raspberry Pi Cloud project links together 56 Raspberry Pi computer boards in racks made from Lego, which mimic the function and modular design of commercial cloud computing infrastructure. 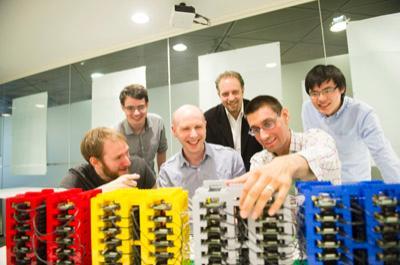 In recent years cloud computing has become increasingly popular, with major corporations such as Google, Amazon and Microsoft making huge investments to provide software and hardware resources to business and home computer users over the internet.

However, cloud computing service providers maintain a great deal of secrecy over how their systems work beyond the software available to end-users, making it difficult for computer science researchers and students to develop practical understanding of cloud infrastructure.

Dr Singer said: “The introduction of the Raspberry Pi last year offered us for the first time the opportunity to affordably build a small, portable and energy-efficient network of computers which could act as a platform for cloud computing research and teaching.

“For an initial investment of less than £4,000, we’ve been able to build a Linux-based system which allows researchers and students complete access to a working cloud computing infrastructure at a tiny fraction of the cost of its commercial equivalent. We’ve used 56 Raspberry Pis in this first project but the numbers involved could easily be scaled up or down as required.

“Although we’ve been offering lectures for students on cloud computing for several years now, the Raspberry Pi Cloud gives us a major advantage over other universities because we can now offer students hands-on experience with cloud computing hardware and software and give them a unique skillset they can take into the job market.”

Launched last year, the credit card-sized Raspberry Pi requires just a keyboard and a monitor to run and was designed to provide young people with an affordable and flexible introduction to computing science. The Raspberry Pi Foundation, the charity which developed the hardware, has sold more than 1.2 million system boards to date.

Dr White added: “Before we built the Raspberry Pi Cloud, we relied on software models of how cloud data centres worked for our research and teaching. Software simulations can be valuable but they are not wholly successful at replicating the practical difficulties of running a data centre.

“What our Raspberry Pi system gives us now is a very clear correspondence between the hardware and the software, and a physical setup which is very similar to how racks of servers work in real data centres. We’ve been really inspired by having a practical model to experiment with.

“The ARM processors which are used in the Raspberry Pi are also becoming more common in cloud data centres because they require less energy to run than more traditional PC hardware, which gives our students another advantage for their future careers.

“At the moment, the Raspberry Pi Cloud is available for students to work on, but we’re keen to integrate the project more fully into our courses and make cloud computing a key part of our teaching programme.”

Undergraduate student Richard Cziva, from Hungary, has been developing a web-based interface to control the Raspberry Pi Cloud as part of his final-year project.

Richard said: “I think the Raspberry Pi Cloud is a very valuable tool for teaching and I’m really pleased I’ve been able to work on it. I’ve been able to build a very practical understanding of how cloud data centres work and are controlled.

“I’ve recently secured a summer internship to work on a cloud-computing project. At my interview for the position they were very interested in the Raspberry Pi Cloud and I’m certain the experience of developing my project went a long way to getting me the position.”