Professor Andrea Nolan, Senior Vice-Principal and Deputy Chancellor of the University of Glasgow, has been awarded an honorary OBE. The honorary OBE, which is awarded to non-British nationals for their contribution to British interests, was made for services to veterinary science and higher education.

Professor Nolan graduated as a veterinary surgeon from Trinity College Dublin and, after a short time in veterinary practice, embarked on an academic career which took her to the Universities of Cambridge, Bristol and the Technical University, Munich. 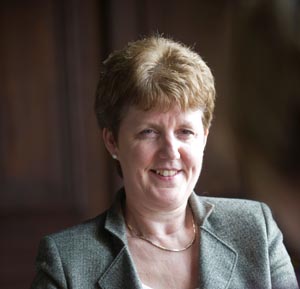 Most recently Professor Nolan has instrumental in the successful development of the University of Glasgow’s internationalisation strategy, a cornerstone of the University’s broader strategic plan. In July she will take over as Principal of Edinburgh Napier University.

Professor Nolan said: “I am both surprised and very pleased to receive this honour. This recognition is really a tribute to the talent, commitment and vision of so many colleagues in Higher Education and in my own academic discipline of veterinary science.  We have much to celebrate in our universities and I feel privileged that I’ve had the opportunity to work over many years in a highly creative, ambitious and supportive sector”.

Professor Anton Muscatelli, Principal and Vice Chancellor of the University of Glasgow, said: “I am delighted that Andrea Nolan has been awarded an OBE which is recognition for her incredible contribution to higher education. She has been a highly valued colleague who has contributed an enormous amount to the University of Glasgow both as a senior academic and as a member of the senior management team.

“Although I am immensely sad that Andrea will be leaving Glasgow, I am also thrilled at the opportunity that her new appointment as Principal of Edinburgh Napier University will bring for her. We wish her all the very best for the future and again congratulate on being awarded an OBE.”

For more information please contact the University of Glasgow:

Non-British nationals can receive honorary awards for their contribution to British interests. Honorary awards are conferred by the Queen on the advice of the Foreign Office.