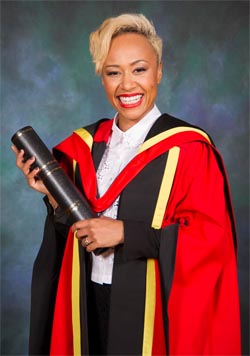 Emeli Sandé attended the University of Glasgow between 2006 and 2009 where she received an intercalated degree in neuroscience. She was awarded her honorary degree for her outstanding contribution to the music industry. This year she performed at the opening and closing ceremonies at the London Olympics and released three No.1 UK singles. Her debut album, ‘Our Version of Events’ remained top of the UK album charts for 63 weeks, breaking the record previously held by The Beatles. In addition to her solo work Emeli has written music for a host of stars including Rihanna, Leona Lewis, Cheryl Cole and Susan Boyle.

Steven Moffat is a BAFTA award winning television writer and producer who, alongside his work on ‘Dr Who’, also co-wrote the recent BBC series ‘Sherlock’. Steven is an alumnus of the University of Glasgow.

Professor Heather Munroe-Blum, Principal and Vice-Chancellor of McGill University in Montreal, Canada, has been awarded the Doctor of Letters (DLitt). Professor Munroe-Blum advises governments on the role that progressive, evidence-based public policy play in enriching society and enhancing international competitiveness.

The University of Glasgow also awarded the title of Doctor of Science (DSc) onto three world-renowned scientists: Professor Asma Ismail is the Deputy Vice-Chancellor for the Institute for Research in Molecular Medicine, University Sains Malaysia and currently holds a position as Vice Chancellor of Universiti Sains Islam Malaysia; Professor Srinath Reddy is President of the Public Health Foundation in India; and Professor Mark Walport is the Director of the Wellcome Trust in the UK.

“It’s also a privilege to be able to honour eight other figures who are recognised as leaders both within their own fields of expertise, and beyond.”

The full list of Honorary Degrees presented on 12 June are listed below:

The following Honorary Degrees awarded at ceremonies throughout June are listed below: