James Morton, an undergraduate student in the University of Glasgow’s School of Medicine, will appear in the final of the BBC’s Great British Bakeoff on Tuesday 16 October in a bid to be crowned Britain’s Best Amateur Baker. 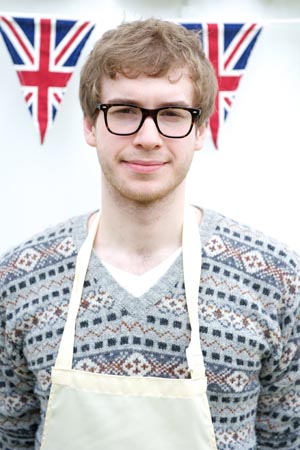 James, 21, from Hillswick in the Shetland Islands, spent his summer filming for the show in Somerset, and enters the final having avoided being knocked out for nine consecutive weeks.

Taking a scientific approach to baking, James has earned a reputation for unique culinary creations including a choux pastry bicycle and a derelict gingerbread barn. He has also developed a loyal following due to his quirky dress sense and penchant for Fair Isle knitted jumpers.

James said: “It's amazing to have got this far in the competition. Setting out, I didn't think this would ever happen, but luck has so far been on my side and I am so grateful for everyone's support.”

Professor Anton Muscatelli, Principal and Vice-Chancellor of the University of Glasgow, said: “I would like to congratulate James on his progress in this year’s Great British Bake off and certainly wish him well in the final.  It is yet another example of the diverse range of talents our students and graduates possess and which allows so many of them to go on to excel in a wide range of fields across the Arts, in public service, the professions and business.”