The University of Glasgow’s Centre for Robert Burns Studies is to collaborate with ‘BurnsScotland’, the new name for the Distributed National Burns Collection, to produce the first ever extensive database of the bard’s manuscripts. 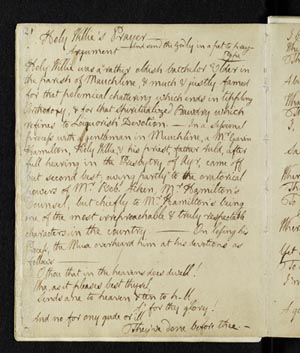 Under the arrangement, all of the papers of Robert Burns held by national institutions, local authorities and other organisations under the ‘BurnsScotland’ umbrella will be examined and corroborated and their details digitised and then stored at the Centre for Robert Burns Studies at the University of Glasgow for use by the partners of ‘BurnsScotland’. The repository will include images with paper sizes, watermarks and other descriptive features recorded.

Professor Gerard Carruthers said, “This is a hugely significant development which will greatly benefit those who study the writings of Robert Burns. The man, as we know, was a voracious author who penned more than 600 poems and songs. But the quality of paper that he used varied, depending on what he was doing and even at different stages of his life. When a ploughman it was sometimes whatever scraps of paper he could find, and when Burns was an exciseman he used paper from his employment there.”

“This database will not only allow for quick and easy access to the materials but it will also enable us to identify and put back together papers that have become separated, and even allow us to show examples of genuine Burns works and Burns forgeries. This will include the infamous ‘Antique Smith’ (Alexander Howland Smith) who in the 1890’s went so far as to acquire 18th century paper to strengthen his deception.’

The database, which it is hoped will eventually extend to international collections so as to include all examples of physical paper used by Robert Burns, will be completed in its first phase over the next eighteen months, before being widened to collect data from libraries and other archives beyond Scotland.

The ‘BurnsScotland’ collection comprises the greatest collection of Robert Burns materials in the world, and is one of Scotland’s greatest cultural assets.

You can read media coverage of the story at: