Are you cuckoo? What your emailing style says about you

Most people have an email address these days and electronic mail has superseded letters and facsimiles as the primary method of written communication between individuals, particularly in business.

However, the increased use of email in business has also resulted in the development of particular idiosyncratic patterns of emailing behaviour that can either delight or enrage. 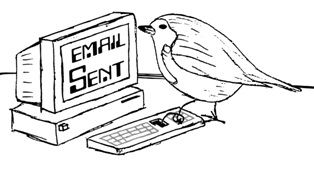 Dr Karen Renaud, senior lecturer in the School of Computing Science at the University of Glasgow, said: “Email has rapidly become a vital business communication tool and a lot of people we spoke to say they would not be able to do their jobs without it.

“However, many people have gripes about email. Some people find themselves checking email all the time, even during evenings, weekends and holidays, others complain about how other people behave when using email.

“When we analysed all the findings we realised we could categorise email behaviours and match them to the characteristics of some well-known birds.”

The researchers identified a total of 15 bird-like characteristics of email users, including:

There was one type of bird associated with perfect email manners: the robin. These people are admired for not allowing email to dictate their lives and making time to speak to people in person whenever they can.

In the media: Times of India, BBC Online, Daily Mail

Dr Renaud added: “It is likely most people will be able to identify some of their email correspondents with these behaviours and perhaps even recognise their own email style.

“What the research really highlights is that email is a great source of stress for many people. Too often, email is used instead of a more suitable means of communication like actually talking to someone.

“People send email without thinking of the cost to the recipient, but if everyone does this we all become much less efficient and no-one wins. People need to think before they send an email: is this the best way of communicating? Even if it is, still think before you click!”

The research, carried out with Judith Ramsay at the University of the West of Scotland, is published in Interfaces, the quarterly magazine of the British Computer Society.

The full list of email behavioural types is listed below: