A $200 million upgrade to the United States-based gravitational wave detector network, which could help unravel some of the enduring mysteries of the universe, has had crucial components designed and installed by the University of Glasgow. 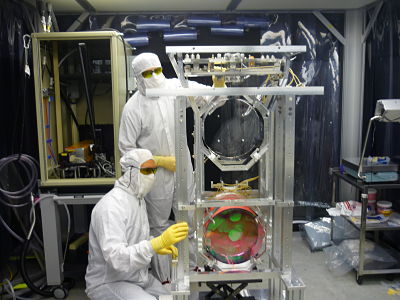 The LIGO (Laser Interferometer Gravitational-Wave Observatory) project is jointly led by the Massachusetts Institute of Technology and the California Institute of Technology, and involves partner organisations across the world. The project operates gravitational wave detectors at the LIGO Livingston Observatory, Livingston, Louisiana, and the LIGO Hanford Observatory in Washington State. The detectors are currently undergoing a major upgrade, to Advanced LIGO, which will provide the world’s most highly-sensitive measurement instruments.

The 40kg ultra-pure mirrors at each end of the 4km-long tubes which make up the detectors are delicately suspended by thin silica threads, creating a ‘monolithic’ glass suspension system developed at the Institute for Gravitational Research in the School of Physics and Astronomy, University of Glasgow, a crucial part of larger assemblies designed and provided by a set of UK partners.

The detectors have been built to measure the effect of gravitational waves, ripples in spacetime caused by massive astronomical events such as the explosion of dying stars and coalescence of binary neutron stars and black holes. The existence of the waves was predicted by Albert Einstein more than a century ago but they have never been directly observed by an experiment.

As gravitational waves from astronomical events ripple out across the universe, they greatly decrease in amplitude and are tremendously difficult to measure by the time they reach and travel through the Earth. When the Advanced LIGO detector is fully operational it will measure the relative distance between 40kg mirrors suspended at each end of a four-kilometre-long vacuum tube to a precision of 1/1000th the diameter of a proton (10-18m).

The University of Glasgow's Dr Giles Hammond and Dr Angus Bell have just returned from the LIGO Livingston site, where they helped install the silica suspensions.

Dr.  Hammond said: “In order to measure the very small effect gravitational waves, the mirrors need to be kept isolated from every possible factor which could interfere with the measurements, right down to the vibration of the mirrors’ molecules due to thermal fluctuations.

“The fused silica suspension system we’ve developed plays a major role in keeping the mirrors utterly isolated from external factors. The fibres which hold the mirrors in place are 60cm long and are stronger than steel, and are attached to the side of the mirror surface using laser power from a carbon dioxide laser.

“What we hope to achieve by measuring gravitational waves is to gain a greater understanding of the nature of the universe. The first direct detection of gravitational waves will be a spectacular confirmation of a key prediction of General Relativity. Beyond this lie opportunities for discoveries in astrophysics, cosmology and fundamental physics, where gravitational wave astronomy provides unique tools for detecting and studying phenomena in extreme environments, unobservable by other means.