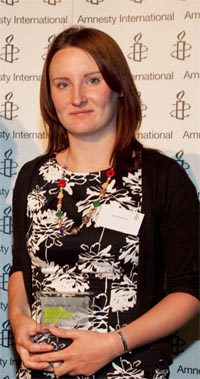 Amy took home the award for her article ‘The Curious Case of John Uguchuckwu’, which reported the plight of a Nigerian student deported from the UK, published in the Glasgow university student Guardian last December. This award places Amy in such company as Marie Colvin (Sunday Times), Will Storr (Observer), Mary Turner (Times) and Vanessa Baird (New Internationalist), all of whom were honoured at the event.

‘The Curious Case of John Uguchuckwu’, tells the story of the plight of a Nigerian asylum seeker who was deported from the UK. Born in Lagos, Nigeria, John fled to the UK to claim asylum after his mother, father and two sisters were killed in sectarian violence. On 20 July, John was deported from the UK after his appeal in the Scottish high court failed. Staff and students at the University of Glasgow have since set up the ‘Oor John’ campaign, which is working to raise funds and awareness on John’s behalf.

Amy, who graduates in June, said: “It was a fantastic to be shortlisted for the award, never mind to win it. I am absolutely thrilled, especially alongside some big names in the world of journalism; this experience has definitely given me the confidence to pursue journalism now that I have finished my degree at Glasgow.

“Through the ‘Oor John’ campaign, things are looking a lot better for John and he has completed his degree in Lagos. Although it’s my name on the article, it was a team effort from students and staff across the campus to bring John’s case to public attention and it was really humbling to see that hard work pay off.”