Scientists at the University of Glasgow have captured images of ‘quantum entanglement’ on camera for the first time.

In quantum mechanics, entanglement is one of the bizarre behaviours exhibited by particles where the rules of classical physics are broken and seemingly impossible events are a reality.

Described by Einstein as ‘spooky action at a distance’, entanglement is the phenomenon whereby two particles act as one system even when separated by immense distances. 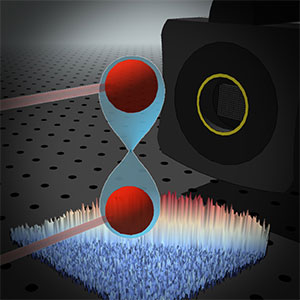 The entangled particles are in a superposition where their individual state isn’t known. However, as soon as one of them is measured or observed the other will take on a correlated state instantaneously, seemingly violating the speed of light.

Being able to exploit such behaviour would have major applications in communications encryption and could underpin the next generation of computer technology, known as quantum computation.

The team in the School of Physics and Astronomy comprising Matthew Edgar, Daniel Tasca and Professor Miles Padgett, have taken a step towards the development of such applications by measuring strong spatial entanglement of photons – particles of light – using a highly-sensitive camera. Making use of a 201 by 201 pixel array, the camera could observe the full field of the quantum light at the same time, allowing the team to see up to 2,500 different entangled dimensions or states.

Entangled photons can be created by using a special crystal to split one photon into two.

By taking pictures of pairs of photons the researchers measured correlations in the photons’ positions to a degree that is not allowed according to classical physics.

Prof Padgett, said: “The maxim: A picture tells a thousand words is nowhere more true than here where each pixel contains its own information, potentially revolutionising the data capacity of quantum secured communication.

“This research is an important step towards future quantum technologies and more generally shows that cameras can lead to important new capabilities in quantum information science.”

The research, ‘Imaging high-dimensional spatial entanglement with a camera’, was conducted in collaboration with researchers at Heriot-Watt University and the University of Ottawa and is published in Nature Communications.

A copy of the paper is available here