Martian meteorite touches down at the University of Glasgow

After hundreds of thousands of years drifting in space, a piece of the rocky surface of Mars has made its way into the hands of scientists at the University of Glasgow.

Researchers based at the Scottish Universities Environmental Research Centre (SUERC) in East Kilbride have taken delivery of a 0.2-gram fragment of a Martian meteorite which fell to Earth in Morocco last year. They will use cutting-edge mass spectrometer technology to help determine how long it spent in space. 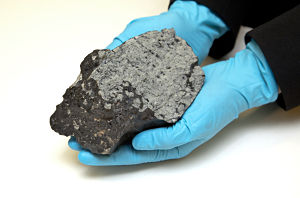 The meteorite, named ‘Tissint’ after the area of Morocco where it landed, is one of just 61 Martian meteorites to have been found on Earth. They were blasted from the face of Mars many thousands of years ago by impacts of several massive asteroids, and travelled through space before crashing down on our planet. Tissint was acquired by the Natural History Museum, London, in February and small pieces of it are being allocated to universities across the UK.

The Martian meteorites which have been discovered on Earth each come from three different areas of the planet and are classified as nakhlites, shergottites and chassignites. 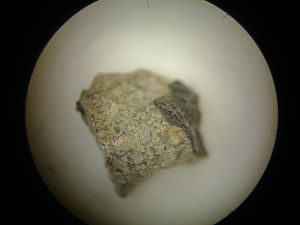 Previous chemical analysis has shown that all the nakhlites were ejected from Mars about 10 million years ago.  However the shergottites and chassignites have a range of space ages, indicating that Mars has been impacted several times. By examining their piece of Tissint, a shergottite, the SUERC team hope to get a clearer idea of when the meteorite left Mars, and how long it spent in space.

Dr Fin Stuart of SUERC, who will be leading the Tissint analysis, said: “As meteorites travel through space, they are bombarded with high-energy cosmic radiation, which our atmosphere shields us from here on Earth.

“The radiation explodes some atoms in the meteorite, creating a ‘daughter’ atoms. The new atoms are known as cosmogenic isotopes. They are very rare on Earth and are one of the telltale fingerprints which show an object has spent time in space.

“We will use a high-precision mass spectrometer to measure the cosmogenic isotopes of the gases helium, neon and argon in Tissint. From these measurements we can determine how long the meteorite was exposed to cosmic radiation in space, and thus how long ago it left Mars.

“It requires measuring a few million atoms, but we’re hopeful that we’ll be able to get a much clearer idea than we currently have of how long Tissint, and the shergottite meterorite group as a whole, spent in space before reaching Earth.”

The SUERC research is part of an array of space-related research currently underway at the University of Glasgow. The Space Glasgow Research Cluster, officially launched by UK Minister of State for Universities and Science David Willets MP earlier this year, includes the development of ultrasonic drills for use in Mars exploration, asteroid deflection technology, and generating solar power in space with specially-designed satellites.