People in the UK are significantly misjudging the amount of sugar in popular drinks, particularly those perceived as “healthy” options according to research revealed today by the University of Glasgow.

2,005 people from across the UK were asked to estimate how many teaspoons of sugar were in some of the UK’s most popular drinks. Whilst people generally slightly overestimated the amount of sugar in carbonated drinks, they significantly underestimated the sugar levels in a milkshake, a smoothie, an energy drink and a variety of fruit juices – by nearly 18 teaspoons for one popular pomegranate juice drink [see graph and chart below for further detail]. 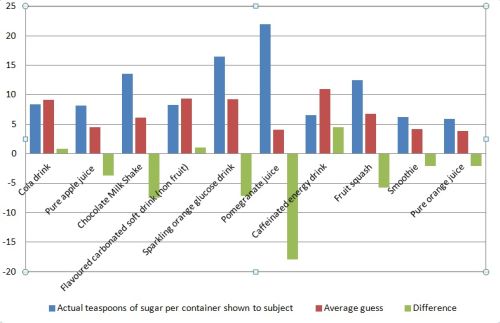 Those surveyed were also asked to estimate their average weekly liquid consumption in detail,  suggesting that the average person in the UK consumes 659 grams of sugar and 3,144 calories per week (which equates to 450 calories per day) through non-alcoholic liquid intake.1  This is the equivalent of nearly a quarter of recommended daily calories for a woman and a fifth for men.

The availability and consumption of sugar-sweetened drinks, such as full sugar carbonated drinks, fruit drinks, sports drinks and energy drinks, has increased considerably over the past two decades.  The overconsumption of sugar-sweetened drinks contributes to obesity which is a major risk factor for health conditions such as type 2 diabetes, high blood pressure and heart disease and stroke.

The survey also revealed that nearly a quarter (24%) of those questioned did not take into consideration their liquid sugar or calorie intake when they were last on a diet. Half of people who admitted to drinking three or more sugary drinks in an average day, said they never compensated by reducing the calorie intake of their food.

Naveed Sattar, Professor of Metabolic Medicine at the University of Glasgow, said: “What you drink can be as damaging to the body as what you eat and there is no question that consuming too many sugar-sweetened drinks can greatly contribute to abdominal obesity and therefore increase your likelihood of developing health conditions such as type 2 diabetes and cardiovascular disease. 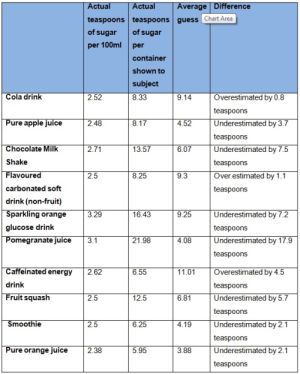 “This analysis confirms that many people are perhaps not aware of the high calorie levels in many commonly consumed drinks.  Some varieties of drinks such as pure fruit juices and smoothies which are perceived as “healthy” options are also very high in sugar. For many people struggling with their weight, reducing their intake of such drinks and replacing with water or diet drinks would be a sensible first target to help them lessen their calorie intake.

“For some, this change might seem difficult or impossible as they admit to having a “sweet tooth.”  However, it is now clear that our taste buds can be retrained over time to enjoy far less sugar in drinks (or no sugar at all).  But people deserve support and encouragement to make these changes and the soft drinks industry also has a role to play here by providing drinks with less sugar or offering cheaper diet versions.”

ICM interviewed a random sample of 2005 adults aged 18+ from its online panel between 30th March and 1st April 2012. Surveys were conducted across the country and the results have been weighted to the profile of all adults.  ICM is a member of the British Polling Council and abides by its rules.  Further information at www.icmresearch.co.uk

1 2005 people across the UK were asked to estimate their intake of non-alcoholic drinks in an average week. They were asked to indicate the type of drink – for example, pure fruit juice/water/squash etc. and the size of the drink – a 330ml can, 1 litre bottle, pint glass etc.  Tea and coffee drinkers were also asked how much sugar, if any, they add to these drinks.

Six best-selling soft drinks were taken (where that information was available) from each category and an average sugar content and calorie content was calculated. For tea and coffee, an average 15ml of semi-skimmed milk was added for each 250ml cup. The average weekly consumption of each drink category was calculated in millilitres and then multiplied by the average sugar and calorie content of the category.

Calculations were made based on 1 teaspoon = 4.2 grams of sugar

Sugar content per drink, per 100ml was taken from supermarket websites