A major component of a satellite that will test technology for precision gravitational measurements has been delivered to the European Space Agency (ESA) by Glasgow scientists.

The team from the Department of Physics and Astronomy was commissioned to build an interferometer for the Laser Interferometer Space Antenna (LISA) Pathfinder probe which will be launched in 2012. 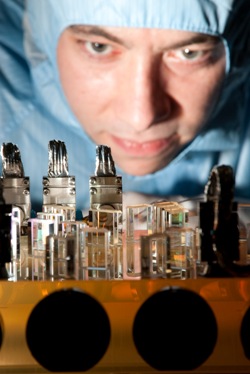 The LISA Pathfinder probe will flight-test equipment and techniques which will be incorporated into the joint ESA/NASA LISA mission planned for launch around 2020. That mission will see three satellites sent into space to search out and detect gravitational waves – ripples in space-time – and thereby open a completely new observational field of astronomy and cosmology.

For the Pathfinder probe the Glasgow team developed an interferometer – an instrument that uses laser light to monitor distances between parts of the satellite payload to a precision of a millionth of a millionth of a metre – with funding of £1.5m from the Science and Technology Facilities Council.

Dr Harry Ward, senior lecturer, Department of Physics and Astronomy, said: “The fabrication of the interferometer has been an extremely challenging project for us over the past few years and has involved an immense amount of hard work by a very dedicated team.

“We are delighted to be so centrally involved in the LISA Pathfinder mission and are very excited about the forthcoming launch.

“Establishing Glasgow as a highly competent and valued supplier of spaceflight hardware has been a major achievement and it has already led to us being commissioned to develop the much more complicated interferometer systems that will be at the heart of LISA.”

Construction of the Pathfinder interferometer involved micron-precision alignment and bonding in place of many optical components on a  monolithic optical bench made from a material called Zerodur, chosen for its low thermal expansion characteristics. 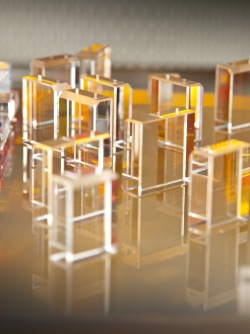 Operating in a dedicated clean-room in the Kelvin Building, the team used a special hydroxide catalysis bonding technique to assemble the interferometer. Photodetectors supplied by collaborators at the University of Birmingham were then added before Glasgow dispatched the completed unit to Germany for testing and incorporation into the Pathfinder probe.

Following the launch from the ESA space port at French Guiana on a Vega rocket, the LISA Pathfinder probe will travel to one of the five Lagrange points – points where the gravitational forces of the Sun and the Earth combine to create small areas where objects can remain nearly stationary relative to the Sun-Earth system.

The full LISA mission will see three satellites sent to follow the Earth in its orbit around the Sun with the three aligned to form an equilateral triangle – five million kilometres apart.

Each satellite will contain two free-floating gold-platinum cubes and the distance between the cubes in different satellites will be measured by the interferometer currently being prototyped at Glasgow. Through this method, any tiny changes – millionths of a millionth of a metre – caused by passing gravitational waves should be detected.