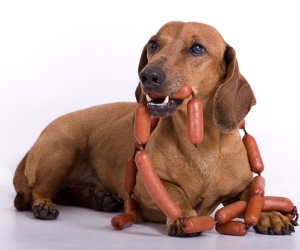 Six out of ten pet dogs are overweight or obese, according to a study by veterinary researchers at the University of Glasgow.

Like humans, portly pooches are piling on the pounds as a result of a number of factors, including being fed scraps from the dinner table, lack of exercise and even how old or rich their owners are.

The study, published in the Journal of Small Animal Practice, was conducted by researchers in Companion Animal Studies at the University who obtained data from 696 dogs and their owners attending five city veterinary practices.

The dogs’ had their body condition assessed and those which exceeded the optimum body condition for the breed by at least 15 per cent were classified as obese.

In addition, owners were asked how often they fed their dog, what type of food was given, how often it was exercised, and the owner’s age and household income.

Dr Philippa Yam, Senior Lecturer, Faculty of Veterinary medicine, Glasgow, who led the study, said: “Obesity is an important welfare issue and one that needs to be addressed.

“As in human beings, being overweight has major health implications because obesity is known to predispose to or exacerbate a range of medical conditions, including arthritis, expiratory airway dysfunction and ultimately decreased longevity.”

The study also found that older dogs and neutered females were more likely to be obese, in line with previous research.

The dogs of owners who earned less than £10,000 a year were much more likely to be obese or overweight than those whose owners earned £40,000 or more.

Older owners were also more likely to own overweight/obese dogs, though this did not affect the amount of exercise a dog received as very little difference was observed in levels of exercise between owners of different ages. However, the intensity of exercise given by younger owners compared to older owners was not measured and this is a subject of further investigation.

Dr Yam added: “As well as factors described in our paper, we have also found that misperception of pet body condition is also likely to be a factor in pet obesity. Positive steps need to be taken to ensure that the number of overweight pets in the UK is reduced.

“We, together with colleagues in human medicine, Professor John Reilly, Professor of Paediatric Energy Metabolism, are using methods to assess canine activity levels more objectively. We gained funding for a PhD project to investigate the human-animal bond in relation to weight loss programmes in both dogs and children.”