A hi-tech computing facility at the heart of the UK’s particle physics research is to expand thanks to a £400,000 grant from the Science & Technologies Facilities Council (STFC).

The facility at the University of Glasgow is the hub of ScotGrid, a network which links to computing centres at the universities of Edinburgh and Durham and other grids in the UK and globally, which processes and stores data produced by the Large Hadron Collider (LHC) at the European Organisation for Nuclear Research (CERN). 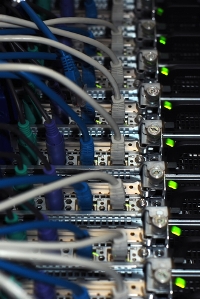 By sharing processing power and storage capacity data collected from LHC experiments can be examined much faster than a single site – with scientists able to start analysing data collected from CERN within six days as opposed to the months it took before.

The ATLAS experiment – which is searching for new particles and discoveries resulting from the high-speed collision of protons – is the largest activity that Glasgow scientists are involved in and gather data from.

ScotGrid was set up in 2000 to give particle physicists and other scientists the processing power and storage capacity they need to conduct research as quickly as possible.

It is the biggest of the regional tier-2 facilities for particle physics in the UK and links to three other grids in the country: North Grid, South Grid and London Grid, which are linked to the UK’s national tier-1 centre at the Rutherford Appleton Laboratory in Oxfordshire, which in turn is connected to CERN itself (tier-0).

Professor Tony Doyle, ScotGrid co-project leader, University of Glasgow, said: “This investment by the STFC is a welcome boost for us. ScotGrid has transformed the way we do analysis and Glasgow is a leading ‘tier-2’ site within the worldwide LHC Computing Grid.

“We have a proven track record of delivering large amounts of grid storage and computational power with levels of reliability unsurpassed in the UK.”

Currently, the centre in Glasgow has 500,000 terabytes (TB) of storage capacity, which will is set to increase by 1 petabyte (1,000,000TB). The facility also houses 140 twin CPU, Dual Core Opteron z80 processors at 2.4Ghz and 170 twin CPU Quad Core Xeon E5420 processors at 2.5Ghz – each with two gigabytes of RAM per processing core. All the equipment fits into five racks within two rooms in the University.

Clustervision has been appointed to supply the new equipment which is expected to be delivered by early September.

The latest grant brings the total amount of funding for ScotGrid to around £5m since its inception.