Thousands of football fans around the world are using an iPhone application developed by University of Glasgow researchers to share their FIFA World Cup match predictions.

As the tournament draws to a close most users are predicting a Spanish victory in the final on Sunday 11 July with 54% of players believing Holland will be defeated.

The application was developed as part of a £525,000 Engineering and Physical Sciences Research Council-funded project looking at using Bluetooth short-range wireless technology as well as 3G and wi-fi to enhance the experience of sports fans, and allow them to share information quickly and securely wherever they are. 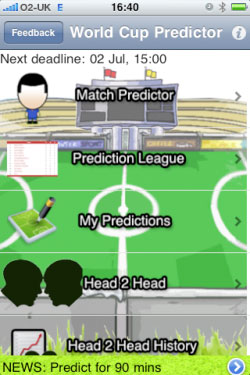 So far, 8,500 football fans from around the globe are playing the World Cup Predictor game which enables fans to connect to each other either using Bluetooth – which is free but short-range – 3G or wi-fi, with feedback helping the researchers to design new features for the game.

Lead researcher Dr Matthew Chalmers said: “This is a fun game for thousands of football fans worldwide. As they play the game, though, they are also taking part in system design of a style and scale that has not been seen before.

“We are pioneering mass participation in the design of systems for phones, going far beyond the more traditional user trials which typically focus on recruiting 10-20 local volunteers.

“We have made football fans an object of study ‘in the wild’ and an aid to designing radical new phone-based systems for sharing sport experience.”

The project initially started with a small group of eight local football fans who were paid to take part in a study as they followed their teams in the Scottish Premier League.

Now the researchers have had discussions with football clubs to design a similar game for fans and are speaking to other organisations interested in the game.