Award-winning novelist Louise Welsh has been appointed writer-in-residence at The Glasgow School of Art and the University of Glasgow.

Bestselling author of The Cutting Room, Tamburlaine Must Die and The Bullet Trick and winner of the Crime Writers’ Association Creasey Dagger and the Saltire First Book Award, Louise brings a wealth of creative writing experience and expertise to the prestigious post. 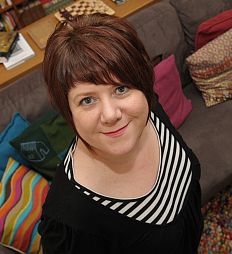 “Louise Welsh is one of Scotland's foremost contemporary authors, always tackling something refreshingly unexpected, from neo-Gothic murder-mysteries set in contemporary Glasgow and the beautiful island of Lismore, to surprising historical fiction in Elizabethan London, her writing explores psychology and place, motive and character, personal relationships and Machiavellian politics. She is also approachable, wise and perceptive about all sorts of aspects of writing and the writing world, and will be very welcoming to students and staff who would like advice about their own work.”

Following in the illustrious footsteps of the likes of Alisdair Gray and Liz Lochhead, Louise is keen to make her mark in the role and will be available to meet writers on Thursdays at the University and Fridays at the School of Art. A reading by the author is already planned for 5.30pm on Tuesday 18 January in the Adam Smith Building.

No stranger to campus, Louise graduated in History and later Creative Writing at Glasgow and her latest book, Naming the Bones uses the University extensively as a contemporary backdrop.

Louise Welsh said: “When I was a student I attended a creative writing class run by the South African writer, Zoe Wicomb. She gave my writing close attention and I felt an obligation to keep writing for her. She gave me confidence in my own ability and I would like to be able to do the same for others.

“Staff and students will be doing me a favour by bringing their work to me. I’m keen to see not just novelists but poets, memoir writers, song writers and those people who don’t quite know what kind of writing they’re doing. I’d also like to meet scientists, engineers, architects and others because writing should not be confined to the College of Arts.”

Director of The Glasgow School of Art, Seona Reid said: “We are all looking forward greatly to welcoming Louise. The opportunity to work with a writer in residence of such literary stature is hugely rewarding. There is a wealth of creative writing talent across the Art School. I am sure Louise will draw it out and also encourage others to make a start.”

Louise Welsh concluded: “One thing I would like to say is that writers are always learning and I’m still going through the same process students are going through. We’re all still facing the same blank page and we all need a sounding board to know when things are working or not. But while sharing and discussing work is valuable, I don’t want to turn out writers like me, I want to help writers find their own way.”

Louise can be contacted by writers on louise.welsh@glasgow.ac.uk

The Writer-in-Residence is funded jointly by Creative Scotland, Glasgow University College of Arts and The Glasgow School of Art.

Louise studied history at the University of Glasgow where she gained an honours degree and then opened a second hand bookshop which she ran for several years before becoming a full-time writer. In 2000 she gained an MLitt in Creative Writing (Distinction) from the Universities of Glasgow and Strathclyde.

Louise has been the recipient of several awards including The John Creasey Memorial Dagger, the Saltire First Book Award, the Glenfiddich/Scotland on Sunday, Spirit of Scotland Writing Award and City of Glasgow Lord Provost’s Award for Literature. In 2007 she was included in Waterstone’s list of Twenty-five Authors for the Future.

Louise has written many short stories and produced features for most of the major British broadsheets. She has also written for the stage, most recently Memory Cells (2009) and also in 2009, wrote the libretto for a fifteen minute opera Remembrance Day, music by Stuart MacRae, which was included in Scottish Opera’s Five:15 series. She has also presented several radio features, most recently ‘The Gorbals Vampire', a thirty minute feature for BBC Radio 4, producer David Stenhouse (March 2010) and 'Tibet on the Banks of the Clyde' for BBC Radio 3, Producer Louise Yeoman (September 2010).

Louise’s work has been translated into twenty languages and she has been awarded several international fellowships and residencies including a Robert Louis Stevenson Award (2003), Hawthornden Fellowship (2005), Stipendium at the Internationales Künstlerhaus Villa Concordia (2007/8), Civitella Ranieri Foundation Fellowship (2008), Villa Hellebosch residency (2009) and a Ledig House residency (2010)

Louise is currently writer in residence for The University of Glasgow and Glasgow School of Art.

She lives with the writer Zoë Strachan.