As the £10m Beatson Pebble Appeal breaks through the £8m mark, the name of the new translational research centre has been announced.

The new centre will be called ‘The Wolfson Wohl Research Centre,’ in recognition of donations from The Wolfson Foundation and the Maurice Wohl Charitable Foundation which total £2.85million. 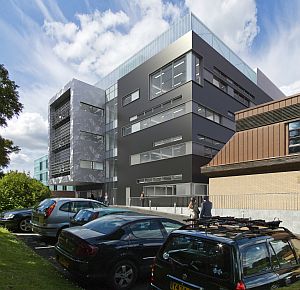 Professor Sir Michael Bond, Campaign Chairman said: “The University has enjoyed a long standing relationship with the Wolfson Foundation, spanning over 60 years and their continued support is highly valued by the University. We are also delighted to have started a relationship with the Maurice Wohl Charitable Foundation through their generous support of the Beatson Pebble Appeal.  Their joint donation has had a significant impact on our appeal, bringing the reality of this world-class facility which will transform scientific advances in the lab into real benefits for patients a good deal closer.”

The site for the new building has been cleared in preparation for the construction process which will start in March 2011.  It is estimated that the build will take 18 months and that the building will be operational by the autumn of 2012.

The fundraising campaign has reached a new milestone with donations topping £8 million of the £10 million target raised through over 1,900 individual donations to the University of Glasgow.  However, with £2 million still to be raised the big challenge is to have the majority of these funds in place by the time the building opens.

The Beatson Pebble Appeal, a £10M campaign to raise funds to build the Beatson Translational Research Centre; the final element in the creation of the Glasgow Centre for Cancer Research.

The Beatson Translational Research Centre will convert basic cancer research into real improvements in treatments for patients.  It will focus upon especially common tumours, those that cause the most deaths in Scotland such as endocrine (breast, prostate and ovarian); smoking related (lung, throat, oral) and gastrointestinal cancer.

The Maurice Wohl Charitable Foundation supports a variety of charitable causes in the UK and Israel, with particular emphasis on the promotion of health, welfare and advancement of medical services, as well as the care ,welfare and support of children, the elderly, those with special needs and the arts.

The Foundation identifies projects that fall within their remit and follows a rigorous process of due diligence. The Foundation does not accept unsolicited applications.

The Wolfson Foundation is a charity that was established in 1955. It aims to support excellence, generally through the funding of capital infrastructure in the fields of science and medicine, health, education and the arts & humanities.

The endowment of the Wolfson Foundation is currently some £725 million, with an annual allocation of approximately £35 million. By 2010 over £600 million had been awarded in grants (in excess of £1 billion in real terms). Over 8,000 projects have been funded.

As well as backing excellence, grants are often made to act as a catalyst - so that the Foundation's funds can lever additional support.

An important element of the Foundation's strategy is to seek collaboration with other expert bodies.  Fruitful partnerships have included leading academic societies (notably the Royal Society and the British Academy), government departments, other grant-making trusts (such as the Wellcome Trust) and charities ranging from Help the Hospices to the Art Fund.