Women easier to read after all

A study by a University of Glasgow psychologist, examining whether personality is related to facial appearance, has found that women’s faces are easier to read than men.

Published today (Thursday 12 February) in the New Scientist magazine, the experiment reveals that women’s faces “give away far more than men”.

The study was devised by Dr Rob Jenkins, a specialist in the psychology of social interaction at the university, and Professor Richard Wiseman of the University of Hertfordshire.

According to Dr Jenkins the results of the journal's pilot should pave the way for further investigations of the link between a person’s character and their appearance.

Dr Jenkins said: “Past studies have shown that people do associate facial appearance with certain personality traits and that our snap judgements of faces really do suggest a kernel of truth about the personality of their owner. But we were very surprised by these findings. We did not expect there to be such a difference between the sexes.”

The experiment of more than 1000 New Scientist readers was carried out in December last year. Readers were asked to submit a photograph of themselves looking directly at the camera and to complete an online personality questionnaire – rating how lucky, humorous, religious and trustworthy they believed themselves to be. From the personality self-assessments, the experts identified groups of men and women scoring at the extremes of each of the four personality dimensions. 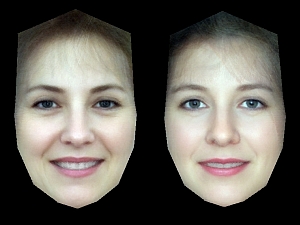 “The photographs were then taken and blended electronically to make several composite images,” explained Dr Jenkins. “This allowed us to calculate an average of the two faces. For example, if both faces have bushy eyebrows and deep-set eyes, the resulting composite would also have these features. If one face has a small nose and the other has a large nose, the final image would have a medium-sized nose.

“Each composite looked very different from one another. We wanted to know whether people would be able to identify the personalities of the individuals behind the images. To find this out we paired up composites from the extreme ends of each dimension and posted them online. For example, the composite face from the women who had rated themselves as extremely lucky was paired with the composite from those who had rated themselves as very unlucky,” he said.

More than 6500 visitors to the site attempted to identify the lucky, humorous, religious and trustworthy faces. From this it appears that women’s faces are more transparent, or “give more away”, than men. 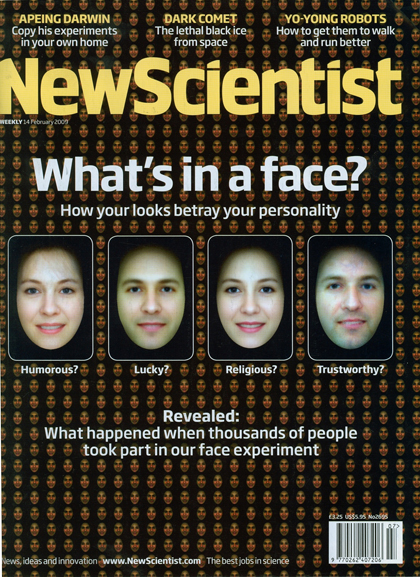 “The results for the male composites were very different,” said Dr Jenkins. “Here respondents failed to identify any of the composites correctly. The images identified with being humorous, trustworthy and religious all came in around chance, whilst the lucky composite was only correctly identified 22 per cent of the time. This suggests that our perception of lucky-looking male faces is at odds with reality.

“If there was nothing in this at all then the score should have been 50% across the board, but it wasn’t. Perhaps female faces are simply more informative than male ones,” he added.

However, there could be other reasons to explain the findings. “It could be that male participants were less insightful or less honest when rating their personalities, or perhaps the women were more thoughtful when selecting the photographs they submitted. But overall the data is fascinating. It pushes the envelope in that we are looking at subtle aspects of psychological make-up. It also shows that people readily associate facial appearance with certain personality traits. How accurate these associations are is an interesting question. It’s possible that there is some correlation between appearance and personality because both are influenced by our genetic make-up,” said Dr Jenkins.

For more information or images please contact Eleanor Cowie, Media Relations Officer, at The University of Glasgow on 0141 330 3683 or e.cowie@admin.gla.ac.uk