Scientists at the Universities of Glasgow, Strathclyde and Central Lancashire have used 21st Century solar observations and image processing to finally solve a sunspot puzzle first noticed in the 18th Century.

Professor Alexander Wilson, the first Director of the Glasgow University Observatory (from 1760 to 1784), discovered in 1769 what is now known as the 'Wilson Depression' - the slightly 'dished' appearance of sunspots, which is most visible when spots are at the edges of the Sun. Wilson theorised that sunspots were depressions in the Sun’s surface, and we now know that the dished appearance is because the radiation emitted from the cooler sunspot comes from a slightly deeper layer in the solar atmosphere than the radiation emitted by the warmer surface that surrounds it. But how much deeper? 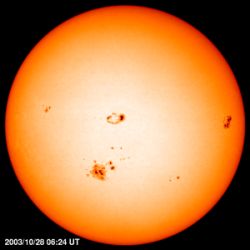 Wilson could not answer this, and we cannot measure the depth directly, but it is crucial in understanding the internal structure of sunspots and their magnetic fields. Scientists have now developed a way to work out the depth by combining information from many thousands of sunspot observations.

“Sunspots can only be detected if they are large enough, and the visible size of a sunspot to an observer on Earth depends on many factors all working together. The depth of the Wilson depression is one of these factors. Depth is important because the base of a sunspot, sunk below the solar surface, can be 'occluded' by the sides of the sunspot and by the surrounding surface when viewed edge on, which happens when the spot is at high longitude positions on the Sun, far away from the centre of its disk. This occlusion effect means that a deep sunspot viewed almost edge on will look smaller than a shallow sunspot viewed from the same angle.

“A useful analogy is to think of looking at a deep bowl and a shallow bowl nearly edge on. The bottom of the bowl (the base of the sunspot) is partly hidden by the sides of the bowl, and the deeper the bowl, the more of the base of the bowl is hidden. Likewise, deep sunspots at high solar longitudes will appear smaller and be more difficult to observe than shallow sunspots. However, this is only one small part of the many complex processes which determine the pattern of spots on the Sun, and so we had to examine the largest possible dataset of sunspot observations, and combine the results with modeling, to disentangle the sunspot depth from all the other factors at work.”

Fraser Watson, the PhD student who led the analysis, continued

“To ensure a reliable and consistent dataset of sunspots we used automated image processing techniques, developed with Prof. Stephen Marshall of the University of Strathclyde. These methods allowed us to identify and take measurements from more than 25000 sunspot observations made by the international SOHO (Solar and Heliospheric Observatory) spacecraft over the last decade. A major benefit of this was that SOHO has been in operation throughout the last solar maximum, when the number of spots is greatest, and, being in space, it is not subject to the problems of weather and atmosphere that come with ground-based observatories.

"This large dataset available from SOHO meant that it was possible to study sunspot visibilities at all solar longitudes and allowed us to construct a model of sunspot shape and formation that produced the same statistical patterns as those seen in the data. In comparing our sunspot model with thousands of solar images we could pin down the depth of the base of sunspots to be around 1500 km below the surrounding solar surface.”

Now that scientists have this measurement for the depth of sunspots, it can be used as a 'ground truth' in complex models of sunspot density, temperature and magnetic field. Sunspots will be a core area of research internationally in the next few years, with the launch of the new 'Solar Dynamics Observatory' satellite. Assuming, that is, that sunspot numbers start to increase again, as we are in a period of low sunspot numbers the like of which has not been seen for 100 years.

The work was led by Fraser Watson (1st year PhD student) and his supervisor Dr. Lyndsay Fletcher (Reader) in the Department of Physics and Astronomy, University of Glasgow, in collaboration with Dr. Silvia Dalla of the University of Central Lancashire and Prof. Stephen Marshall of the University of Strathclyde, and grew out of a Glasgow-Strathclyde 'Synergy' summer project. It will appear later this year in the journal 'Solar Physics'. Next year, 2010, marks the 250th anniversary of the founding of the Regius Chair of Astronomy at Glasgow University, first held by Professor Alexander Wilson.