Researchers at the University of Glasgow are hoping to use tiny fabricated tubes to help damaged nerves heal themselves.

The scientists at the University’s Centre for Cell Engineering and Department of Electronics and Electrical Engineering will manufacture tiny polymer tubes with internal microscale patterns which they hope will help guide severed peripheral nerve cells back together.

If successful the team could greatly improve sensitivity and functionality in patients who have suffered peripheral nerve injury, which affects 500,000 people annually in Europe and can result in profound long-term disabilities. Most injuries in working-age adults are as a result of trauma, or assault, but the most severe form, brachial plexus injury, may also afflict newborn babies as a result of complications during birth.

Andrew Hart, a plastic surgeon at the Canniesburn Plastic Surgery Unit in Glasgow Royal Infirmary and Honorary Senior Research Fellow, Molecular and Cellular Biology, is leading the four-year project with Dr Mathis Riehle of the Centre for Cell Engineering. He said: “While surgeons can very elegantly sew nerves back together, the outcomes are very poor when it comes to restoring functionality.

“We hope to develop a better way of connecting nerves to ensure that nerve regeneration is encouraged and so improve the chances of a better outcome in terms of functionality.”

The peripheral nervous system connects the organs and skin to the spine and brain (the central nervous system) through nerve cells – neurons – which transmit either sensory or motor signals. These are bundled together in nerve trunks measuring from between 1mm to 1cm thick which snake through the body. 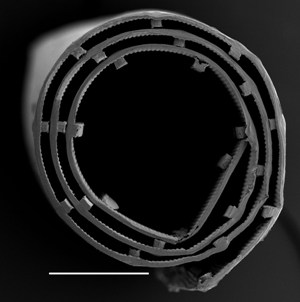 Neurons transmit electrical signals along long fibres called axons. These fibres can be very long – sometimes many feet, as in the case of the sciatic nerve which runs from the base of the spine to the tip of the big toe.

While neurons cannot replicate themselves, their axons can regrow, albeit very slowly. When a nerve is cut, the severed end of the axon dies although the protective coating which surrounds each axon – the endoneurium – remains intact, as does the structure of the nerve trunk, meaning that if the nerve is reconnected, the axon can regrow down this tube and restore function.

However, while surgeons might sew nerve trunks back together using microsurgical techniques that have been developed over 50 years, they can only hope to accurately realign the axon bundles visually and not individual axons because they are so tiny and intertwined. As a result regrowing axons may not return to their original locations, resulting in poor functionality as signals to and from the brain go to the wrong places. Over time, however, the brain can, to a greater or lesser extent, learn to rewire this nerve signalling, but functionality is never fully restored.

Growth will be encouraged further by creating a small electric field along the tube using a radio transmitter worn on the outside of the body. This should also help to measure how the electrical balance of a damaged nerve cell changes, and how it responds to growth promoting stimuli. Work will continue collaboration with units in Sweden and Manchester.

A further complication to ensuring as many new axons regrow is that around 30 per cent of sensory neurons die when cut, even if still connected to the brain, thereby reducing the number of axons that can potentially regenerate and reach the correct destination.

However, as part of his PhD studies in the collaborative nerve research group led by Prof Wiberg of Umeå University in Sweden, and Prof Terenghi at the Blond-McIndoe Laboratories in the University of Manchester, Mr Hart has identified a drug which experimentally does prevent neurons from dying, resulting in more nerve recovery. Clinical trials of these drugs are being planned, with patients in Glasgow as the major clinical centre in a multicentre group, using MRI scans to check whether neuron cell death is prevented.

Mr Hart said: “Peripheral nerve damage can be hugely debilitating, with loss of motor and sensory function.  The outcome of reconstruction really lags behind what has been achieved in the rest of reconstructive microsurgery, an area in which Canniesburn has been at the forefront.

“While surgeons can reconnect severed nerve trunks quite elegantly, we cannot adequately address problems at the cellular level by suturing the nerve. It’s impossible to ensure that every single axon is correctly aligned with its counterpart, and axons regrow very slowly – at around a millimetre a day.

“If we can prevent the death of severed neurons and help regenerating axons to better cross the site of nerve repair, and reach their right destination then we might be able to improve the level sensation and movement in patients with nerve damage. While it would never be 100 per cent normal, increased functionality would be a huge step forward.

“This project is a great example of collaborative working across Europe and, combined with other research being conducted by colleagues in Glasgow into rehabilitation of patients with nerve injury, will hopefully improve treatment methods.

“The Stephen Forrest Trust must be congratulated on its bold and visionary support for the next generation of reconstructive surgical research in Glasgow.”

"The trust aims to support reconstructive surgical research in the West of Scotland, and has already supported innovative work that has lead to improvements in microsurgical reconstruction."

The team is looking to recruit a PhD student as part of the four-year project which is being funded by £200,000 from the Stephen Forrest Charitable Trust.