The Stress of Email

A deluge of emails constantly interupting work is stressing out modern employees, a study has found.

Workers are finding themselves becoming tired, frustrated and unproductive as they attempt to keep up with the messages as they pour in.

Dr Karen Renaud, from the University of Glasgow's Computing Science department, recommends that workers should check their messages just a few times a day to reduce stress levels, safeguard their health and stop feeling invaded by emails.

Dr Renaud said: "Email is the thing that now causes us the most problems in our working lives. It's an amazing tool, but it's got out of hand. Email harries you. You want to know what's in there, especially if it's from a family member or friends, or your boss, so you break off what you are doing to read the email. 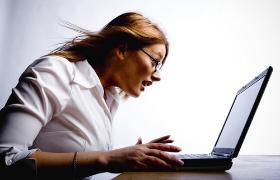 "The problem is that when you go back to what you were doing, you've lost your chain of thought and, of course, you are less productive. People's brains get tired from breaking off from something every few minutes to check emails. The more distracted you are by distractions, including email, then you are going to be more tired and less productive."

Along with psychologist Judith Ramsay of Paisley University and her colleague Mario Hair, a statistician, Dr Renaud surveyed 177 people, mainly academics and those involved in creative jobs, to see how they dealt with emails received at work.

They found that 34 per cent of workers felt stressed by the sheer number of emails and obligation to respond quickly and a further 28 per cent were driven because they saw them as a source of pressure. They characterised just 38 per cent as relaxed because they did not reply until a day or even a week later.

They also found that employees working on a computer typically switched applications to view their emails as many as 30 or 40 times an hour, for anything from a few seconds to a minute. While half the participants said they checked more than once an hour and 35 per cent said they did so every 15 minutes, monitoring software fitted to their machines for the experiment showed it was more often.

"This indicates the astonishing extent to which email is embedded in our day-to-day lives," they say.

They uncovered "evidence of pressure: respondents generally felt they had to respond more quickly to emails to meet the expectations of senders".

The report said: "Females, in particular, tended to feel more pressure to respond than males. Many individuals seem to feel pressured by email and feel this pressure negatively as stress."

Email senders at work should never press other employees, especially those they supervise, to respond to their emails as they would to a phone call, the researchers suggest. Recipients should not constantly monitor their emails "since this will negatively affect all other work activities", and should instead set aside dedicated email reading times to catch up on their messages.

For more information or to speak to Dr Karen Renaud conact the University of Glasgow Media Relations Office on 0141 330 3535 or email r.mchugh@admin.gla.ac.uk