Thinner than a single hair: The future of nanoscale technology

Researchers at the University of Glasgow have cracked a puzzle that has baffled scientists for half a century, and could potentially decrease the size of computers, phones and iPods even further.

Chemist Dr Lee Cronin, and his colleagues in Glasgow and the US have for three years been examining and developing a new type of 'metal oxide based nano clusters', literally a hollow device built from metal atoms and oxygen, and are built from one of the most basic materials found on the earth's surface. During this research they have been able to design these molecules to change colour and release charge upon heating. Dr. Cronin compares these clusters to the 'Trojan-Horse' since they appear pretty and benign, but when they are heated they release charge that could potentially be harnessed to have an effect on their surroundings.

By making these devices smaller, or 'nanoscale', in size the metal oxides are now 10,000 times thinner than a human hair, therefore increasing the technological potential for future generations.

Dr Lee Cronin explains the significance of this development:

"Our discovery should enable the next generation of memory devices, for example RAM, hard disks and DVDs, to back more information into a smaller space to meet our growing technological requirements, including the design of small machines that can help prevent or reduce pollution when we make new materials. As the current pace of improvements in technology year upon year reach their limit, we will be able to introduce these new nanoscale-based cluster devices to potentially pack 10,000 more storage units in a given area than is presently possible.

This opens up many new avenues in research, and could possibly allow a big step forward to the design of single-cluster transistors."

The metal oxide they have produced is described as a 'cluster' since the metal and oxygen atoms are all linked together to form one surface, like a football or a cigar shape.

The team at Glasgow have been trying to take the nanoscopic metal oxide clusters and make them 'smart' materials by way of getting them to respond to an input or stimulus ﾖ such a light, heat, electricity or the presence of another molecule. Dr Lee Cronin's team consists of 15 Glasgow researchers, and has collaborations with top researchers in the USA, Japan, Germany, and Australia.

The results from the Cronin group project entitled "From molecules to hostages: a realistic route to a nanoscopic storage device?" will be published in eminent German Chemistry magazine 'Angewandte' on Friday 27 May.

ScotCHEM ? the chemistry pooling plan ? brings together under one umbrella two new groupings. WestCHEM comprises Glasgow and Strathclyde Universities and EastCHEM brings together Edinburgh and St Andrews. A separate proposal from Heriot Watt University will also go ahead under the ScotCHEM heading and eventually Dundee and Aberdeen Universities could be involved. 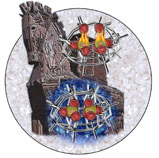