Big Bang, Led Zeppelin, The Teletubbies and an electrified gherkin

What do the Big Bang, Led Zeppelin, The Teletubbies and an electrified gherkin have in common? Acclaimed science and mathematics author and TV personality Simon Singh, that's what!

On Tuesday 7 June, the Faculty of Information and Mathematical Sciences at the University of Glasgow will host two talks by Simon Singh entitled: "The Mathematics of Luck, Risk and Gambling" and "Big Bang". Interest in the work of Simon Singh has been so great that the first two talks are full to capacity with an audience of over 700, a third talk has been added.

The day coincides with the World Year of Physics 2005, a chance to celebrate physics and remember the work of Albert Einstein who published four very special papers exactly 100 years ago.

Simon Singh is well known in the television world for helping better the public understanding of science and mathematics. His latest projects have been with BBC 4 and the Discovery Channel and BBC Radio 4, and he has previously worked on the BBC Horizon series and as a producer on Tomorrow's World. In 2002 he received an MBC for his services to science communication and education.

As author of 'Fermat's Last Theorem' and 'The Code Book', Simon Singh's talk at the University will be about his latest book, 'Big Bang', a history of cosmology. As well as explaining what the Big Bang theory actually is, Simon will recount how the theory emerged and tell the story of the brilliant and eccentric scientists who fought against the establishment idea of an eternal and unchanging cosmos.

Simon Singh comments: "For thousands of years humans have struggled to understand how the universe came to be, and now we are the first generation to have a consistent, coherent, compelling, rational and verifiable theory ﾖ the Big Bang. I want to celebrate the Big Bang theory and explain to people what it is and why we believe in it. Einstein plays a special role in the development of the Big Bang, so it is particularly appropriate that this day of events falls within Einstein Year."

Professor Adrian Bowman, Head of Statistics at the University of Glasgow, comments:

'We are delighted to be able to host this visit by Simon Singh. He is an excellent communicator of both the excitement and the importance of science. The Big Bang talk will be a real celebration of a fascinating and fundamental idea. The schools talk on 'The Mathematics of Luck, Risk and Gambling' will explore some other key aspects of the world we inhabit, in a manner which is both highly entertaining and educational.'

Simon's talk will also look at the astronomical evidence in favour of a Big Bang moment of creation and discuss why today's cosmologists remain confident that the Big Bang theory is an accurate description of the origin and evolution of the universe.

The lecture is likely to include Led Zeppelin, The Teletubbies and an electrified gherkin.

The Big Bang talk will take place in Lecture Theatre 1 of the Boyd Orr Building on University Avenue at 12pm. Staff and members of the public are welcome to attend, but tickets must be obtained in advance. Email Paula McEwan (p.mcewan@admin.gla.ac.uk) for further details and to obtain tickets.

In the afternoon, Simon Singh will address school pupils from across the country and run workshops at the Western Lecture Theatre (WILT).

Simon Singh is available for interview prior to the event. Please contact the University Press Office on 0141 330-3535 to arrange. Fuller details of Simon Singh?s work and background can be found at: Simon Singh webpage.

For further details or to attend the Big Bang talk on 7 June, Paula McEwan, email: p.mcewan@admin.gla.ac.uk. 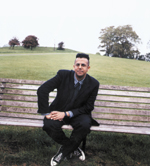