For two days only, The Hunterian Museum at the University of Glasgow will be displaying a monster fish called Big Meg in all her fossilised glory.

The Hunterian Museum is home to Big Meg, the most complete specimen of Leedsichthys problematicus - the biggest fish ever to inhabit Earth's oceans.

Big Meg will also be the subject of a forthcoming television programme in the next &quot;Walking with Dinosaurs&quot; BBC series.

Measuring over 15 metres in length, these fish would have swam the Middle Jurassic seas 155 million years ago, at a time when dinosaurs dominated the land.

Big Meg is the most complete specimen in any collection in the world and was sold to the Hunterian in 1915 by the Peterborough fossil collector Alfred Leeds, whose wife Mary Ferrier Fergusson came from Glasgow. When work began to repair the specimen five years ago, it consisted of over nine hundred broken fragments but after much reconstruction, Big Meg looks a little more like a fish with many large bones from the her skull, as well as some bones from the fins.

Big Meg will be laid out in the Hunterian Museum's Kelvin Gallery for Friday 19 and Saturday 20 September only. In addition, displays and experts will inform visitors about this remarkable animal, and look at some of the critical questions surrounding it.

Who found this fish? How could it grow so enormous? What might it have looked like? What did it feed on? Is it still alive today?

This is a unique opportunity for a once in a lifetime look at the biggest Jurassic giant of the seas. (Shoals should book in advance!)

To round off the weekend viewing, Jeff Liston of the Hunterian Museum (currently conducting a PhD on the fish in question) will present a talk on Monday 22 September at 7.30pm about the fish, including news of a new specimen currently being excavated near Peterborough.

Before and after the talk, visitors will be able to walk around the specimen, laid out on the floor of the Kelvin Gallery. This is an event organised by the Glasgow Natural History Society and non-members are very welcome.

Swimming with the Big Dead Fish is part of the ?Rock On? Scottish Geology Festival 2003.

For further details about the ?Rock On? Scottish Geology Festival events at the Hunterian Museum, or to book, contact Neil Clark on 0141 330 4221 or at N.Clark@museum.gla.ac.uk 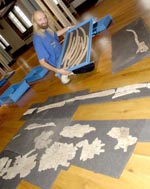