Love and Hate in the Scottish Brewing Archive

The Scottish Brewing Archive, which is housed at Glasgow University Archive Services, will throw open its doors on 25 September 2003 and give the public a chance to view some of its unique archive material and advertising artefacts. This event is part of National Archive Awareness Month and offers a fascinating insight into Scottish brewing history. There will also be an opportunity to learn about the secrets of the brewing trade with Professor Geoff Palmer, OBE, Professor of Grain Science at Heriot-Watt University, who will talk about &quot;Malt, the soul of beer&quot;.

The Scottish Brewing Archive is the only archive organisation in the UK solely dedicated to the brewing industry. It holds the archives of over 120 brewing related companies and associations and offers unrivalled opportunities for research into all aspects of Scottish brewing (including advertising, scientific and technological development, workers' conditions and the life of brewing entrepreneurs). The archive is funded by the brewing industry and has been supported by the University of Glasgow and the University's Archive Services since 1991. It is open to the public by appointment and is widely used by students, historians and the general public as well as by the brewing industry.

As well as general displays showing the wide variety of material held by the Archive, there will be two main displays taking the theme of Archive Awareness Month, &quot;Love and Hate&quot;. The first display reflects the theme in the public sphere, concentrating on the heated Temperance and Anti-Temperance campaigns of the early 20th century and their output in pamphlets, press cuttings, minute books and articles. See images here Glasgow University Archives

The second display of 19th century letters written to William McEwan, who later became a prominent Edinburgh brewer, visits the theme of &quot;Love and Hate&quot; in the private sphere of social relationships. The letters, written by family and friends, serve as a vivid illustration of affections and worries for a young man who is about to make his mark in the world of business, and shed light on William McEwan's life, friends, attitudes and career development. The letters were only recently discovered and acquired by the Scottish Brewing Archive. Read more about the William McEwan letters at Glasgow University Archives

Later in the day Professor Geoff Palmer, a leading authority on grain science, brewing and distilling, will offer a fascinating insight into the brewing process when he talks about &quot;Malt, the soul of beer&quot;. Professor Palmer explains: &quot;Barley malt is the primary raw material of beer. Its extract provides not only alcohol, it is also responsible for yeast growth and flavour and colour of the beer. Malt is produced from special barley varieties which can be processed to produce different kinds of malt. Research has been carried out on malts for over 100 years and this has resulted in the high quality of malt that is available today. &quot;

Images of some display items are available 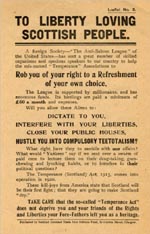