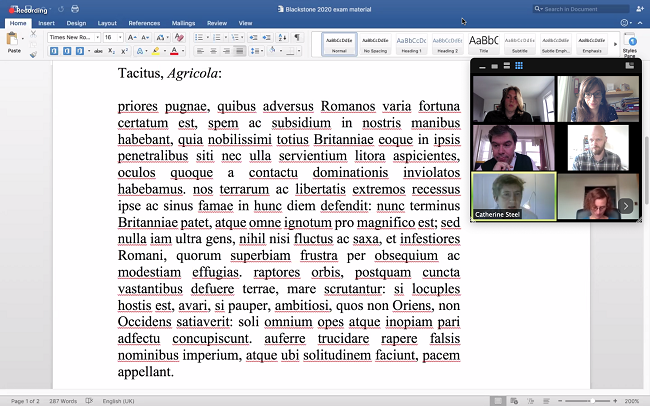 An ancient University of Glasgow Latin examination got the virtual treatment this week due to the Covid-19 public health crisis.

Three students from the College of Arts were quizzed on their knowledge of Latin via Zoom by a panel of three examiners.

Normally the Cowan Blackstone Medal Latin examination, which dates back to 1839 and is open to UofG students who have two years of Latin learning, is held in the main campus in front of an audience and examiners. The students wearing gowns are examined while seated on the historic Blackstone Chair, which holds the original Black Stone used by UofG in its earliest days, before written exams, for students to sit on while their knowledge was tested in a timed oral examination.

This year due to the Covid lockdown, it was a bit less formal with academics and students zooming from their living rooms. But while a lot of the ceremony of the day was missing including the Blackstone Chair, the examination was rigorous with three academics cross examining the students on Tacitus’ Agricola and Ovid’s Metamorphoses.

The three students who took part this year were Fletcher Erskine; Daniel McCue and Joshua McGhee.Following the competition, Daniel McCue was named as the 2020 Cowan Blackstone Medal recipient.

The three judges for the competition were the School of Humanities | Sgoil nan Daonnachdan’s Professor of Latin Costas Panayotakis, Professor of Classics Catherine Steel and Lecturer in Classics Dr Natalia Tsoumpra.

Professor Steel said: “We were delighted to find there was an appetite again this year to run the Cowan Blackstone Medal competition. Even in lockdown having three students wishing to take part was great for the 2020 competition.

They have helped to continue this long-standing Latin competition tradition. I wish to congratulate them all for taking part particularly Daniel who is this year’s Cowan Blackstone Medal recipient.”