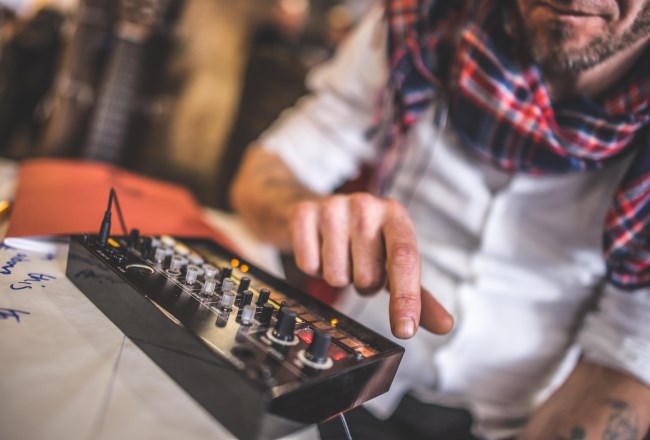 Distant Voices, a research project that has developed song-writing in Scottish prisons as an innovative way of exploring and enhancing rehabilitation and justice, is launching its debut album on Friday May 25, 2018.

The album, called Not Known at this Address, is a collaboration between Scottish song writing talent, people with direct experience of criminal justice, prison staff, researchers and social workers.

Distant Voices is a partnership between the charity Vox Liminis and the Scottish Centre for Crime and Justice Research (SCCJR) and brings together academics from the University of Glasgow, University of West of Scotland and the University of Edinburgh whose work spans criminology, musicology, politics, social work and sociology.

The project, funded by the Economic and Social Research Council and the Arts and Humanities Research Council (and with match funding from arts funder Creative Scotland and from the Scottish Prison Service), aims to change the conversation about punishment and reintegration.

It is led by Professor Fergus McNeill, the University of Glasgow’s Professor of Criminology and Social Work, who said: “Rebuilding a life after crime and punishment is often full of challenges. People with convictions are often locked out of employment and housing, finding themselves without the material resources they need to move on. Imprisonment can also damage relationships with family and friends, weakening the crucial support we all rely on in navigating big life transitions.”

“In other words, the ways that we punish people often weaken the possibility of reintegration. The songs on Not Known at this Address articulate some of these challenges – and invite all of us to think critically about our part in these processes.”

Vox Liminis Director Alison Urie said: “Crime is at heart an emotive topic, but the way we deal with it in criminal justice often ignores the human aspects for everyone involved. Songs provide a way to share stories and thoughts that connect with each other’s humanity, and help us to see beyond the prevailing narrative of ‘goodies and baddies’.”

The songs featured on Not Known at this Address features a variety of genres, moods and lyrical storytelling. The album launches at a gig on 25 May at Saint Lukes in Glasgow and on 29 May at Leith Theatre in Edinburgh (as part of the Hidden Doors festival).

The album trailer can be found here:

Deacon Blue frontman Ricky Ross and BBC Scotland Radio Presenter said of the album: “Listen to these songs not because it's such a worthwhile project, though it is, but because you'll love them.”