Those of you who haven’t travelled into the West End recently might be interested in the changes taking place at “molecular corner” on the junction of Church Street and Dumbarton Road, at the extreme south west corner of the Gilmorehill Campus.

As the campus extension gathers pace, the Virology Building has completely disappeared and the Pontecorvo (Genetics) Building will soon follow.

While the Virology Building was demolished in conventional fashion, the Pontecorvo Building is in a more fragile state and so is wrapped in plastic while it’s deconstructed floor by floor. This may not surprise anyone who worked in it. 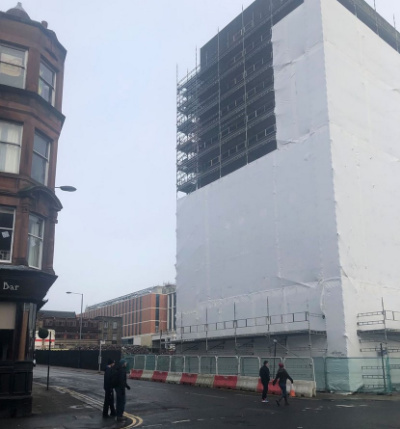 The Institute of Genetics Building, as the Pontecorvo Building was originally called, was first conceived by Hector Hetherington in 1956 as a key part of a centre for medical excellence. With his stellar career in full swing, Brutalist architect Sir Basil Spence was selected to design it.

The Building eventually opened in 1967. Nick Haynes’ 2013 book "Building Knowledge: An Architectural History of the University of Glasgow" covers the rationale behind the design of the building in detail. His most telling comment is that the external panels “have not weathered well”. Those of us who worked in the building may well describe the internal décor in a rather similar fashion. 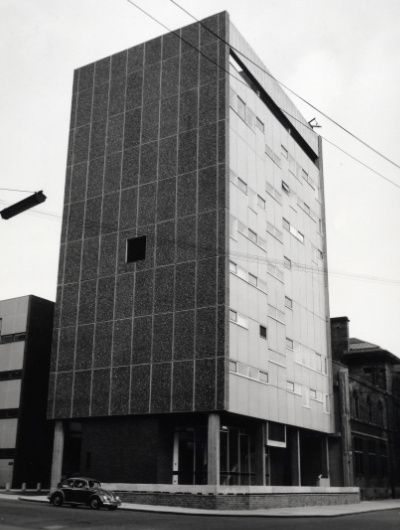 Perhaps the building’s greatest claim to fame is its starring role in Flesh and Blood, the opening episode of the fifth season of STV’s "Taggart", that was first aired on 5 September 1989. Thirty-two years later the full episode can be found on the STV player. If you’re not a "Taggart" fan you could fast-forward to around 1 hour and 43 minutes and see the characters Taggart and Jardine take their first tentative steps into what those of us who worked in the building called “the Paternoster”.

In 1995, the Building was renamed in honour of Guido Pontecorvo, the University of Glasgow’s first Professor of Genetics from 1955 to 1968.

Having been forced to leave Italy in 1938, Ponte, as he was affectionally known, was eventually appointed as a Zoology lecturer at the University of Glasgow in 1945 and was instrumental in forming the Institute of Genetics ten years later. The Pontecorvo Building itself remained the home of many of the University’s Geneticists until 2011 when they decamped to several buildings across the main Gilmorehill campus. 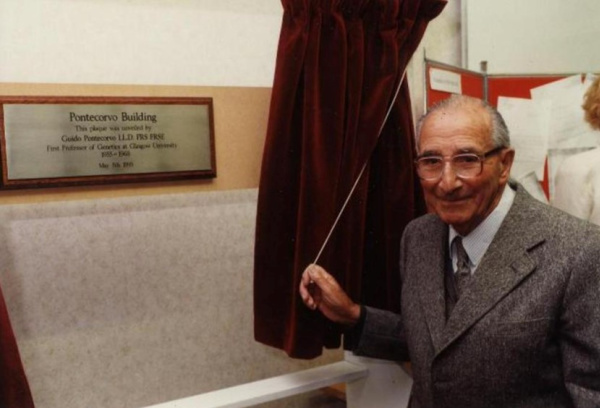 The building was ugly, poorly constructed and rather isolated from the main campus by the Western Infirmary. But what was it like to work in?

I spent 22 years there and despite its many faults, the building, and particularly its paternoster, fostered a thriving and very creative environment. There was something about having all the research and teaching staff moderately isolated in the same space that created a remarkably positive atmosphere. Evidence for that comes from the fact that when my former colleagues found out I was writing this short article, I was inundated with stories, anecdotes and some rather scary old photographs. Perhaps we’ll come back to them another day.

The Pontecorvo Building is being deconstructed as part of the University’s Campus Development Programme, which is creating a new academic and civic quarter on the site of the former Western Infirmary.

The demolition begins in February and will continue until May this year.

It is one of a number of buildings that have been removed from the site to make way for a number of new developments, including the new Advanced Research Centre and the Clarice Pears Building.

Although a number of buildings facing onto Church Street are being demolished, the University’s Campus Development Framework is committed to maintaining and restoring those historic buildings on the site, including the McGregor Building, the old Outpatients Building, the Chapel, The Tennent Institute and Anderson College.