The first step in the transformation of the former Western Infirmary site took place this week: a large store on the north east corner of the site was demolished to make way for the new Mathematics and Statistics building.

The UofG Social Media team were on hand as the old store came down:

You'll see the new 4-storey Maths building start to go up this autumn, and staff are expected to move in in spring 2017. 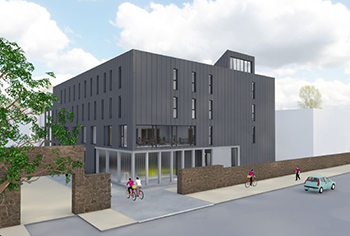 Designed by HLM Architects, the first new University building on the Western site will have improved social areas, informal and structured study space, modern and flexible learning and teaching spaces, floor to ceiling windows, sound proofing and improved WiFi access. In the meantime, it's business as usual in the current Mathematics and Statistics building on University Gardens.

The big black chimney on the north of the site will be taken down towards the end of September. After that, the next demolitions won't be until after the new year.