A poet, a comedian and a musician walk into a physics building…

That’s exactly what happened earlier this month, as part of a brand new project funded by the Institute of Physics. 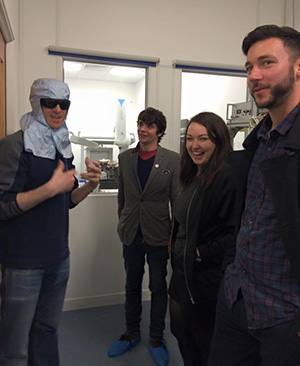 As part of this year’s Glasgow Science Festival, ‘Peake into Space: Cosmic Cabaret’ on Thursday 9 June will feature live performances by local artists, exploring themes of space and astronomy.

Poet Calum Rodger, comedian Gemma Flynn and musician Stuart Cromarty will perform specially-commissioned material, based on their experiences of visiting the University of Glasgow’s School of Physics and Astronomy. The performers participated in laboratory tours and met scientists working on a wide range of space-related research, from developing drills for exploring Mars to the recent detection of gravitational waves.

In between the live performances, the audience will be invited to try some hands-on physics activities, including a remote-controlled ‘Mars rover’.

Dr Zara Gladman, Public Engagement Co-ordinator at Glasgow Science Festival said: “This is a fantastic opportunity to delve into some of the extraordinary physics research happening here in Glasgow, in a truly unique way.

“We would like to express our sincere gratitude to the Institute of Physics for supporting this project. I’m really excited to see the end result!”

Michael Perreur-Lloyd from the School of Physics and Astronomy at the University of Glasgow said: "2015/16 has been a huge milestone in the field of gravitational waves with first detection of the ripples in space-time from the collision of a pair of black holes and the successful launch of the LISA Pathfinder satellite. These experiments will open up new window on the Universe. We are thrilled to work with the Glasgow Science Festival team of musicians, poets & comedians to tell this exciting story."

The event will take place on Thursday 9 June at 8pm at The Admiral Bar, Waterloo Street.

More from the Science Festival