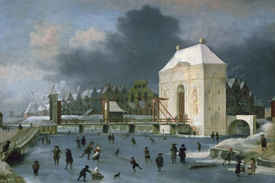 Geoffrey Parker is Fellow of the British Academy, Distinguished University Professor and Andreas Dorpalen Professor of European History at The Ohio State University, and a Corresponding Fellow of the Royal Society of Edinburgh. He is currently the holder of a Carnegie Centenary Professorship at the University of St Andrews, awarded by the Carnegie Trust for the Universities of Scotland. Professor Parker is a world-renowned expert on the social, political and military history of Early Modern Europe.

Professor Parker has taught at the Universities of St Andrews, Illinois at Urbana-Champaign and Yale University. Among his best known books are The Army of Flanders and the Spanish Road. (Cambridge, 1972); The military revolution. Military technology and the rise of the West 1500-1800, (Cambridge, 1988); The grand strategy of Philip II, (Yale, 1998); Imprudent King: A new biography of Philip II, (Yale, 2014) and Global Crisis. War, climate change and catastrophe in the 17t century, (Yale, 2013).

Professor Parker was awarded the British Academy Medal in 2014 for Global Crisis, which it praised as ‘a work that offers a profound and comprehensive study of the seventeenth-century crisis and its global dimensions, while also carrying significance for the current debate on climate change’.

Everyone is welcome to this event