Christian J. Kay, Emeritus Professor of English Language at the University of Glasgow, died peacefully on 4 June aged 76. Over the course of her long career she was an exceptional and generous scholar, and a good and close friend to many of her colleagues. 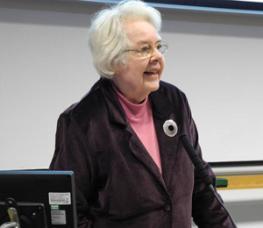 First employed by Glasgow in 1969 to work on the Historical Thesaurus of English in its infancy, Kay was later appointed to a lectureship in the Department of English Language, being named Director of the Thesaurus in 1989 and promoted to Professor in 1996.

In her own words: “I never intended to be an academic. I worked in journalism, English-language teaching and publishing before becoming a research assistant and then a lecturer at Glasgow. The common thread is an interest in language.”

Despite retiring in 2005, Christian continued to pursue the completion of the Thesaurus, finally published in 2009 to worldwide acclaim as the world’s largest thesaurus, the only complete historical thesaurus of any language, and described by Professor Lord Randolph Quirk as “a triumphal outcome, [...] a magnificent achievement of quite extraordinary value […] perhaps the single most significant tool ever devised for investigating semantic, social, and intellectual history”.

The Thesaurus team, led by Christian, relinquished all rights to their royalties, instead directing this income to establish a series of postgraduate scholarships. She recently made a generous gift to the University to continue these for some years to come. In 2013, the University awarded her an honorary D.Litt. in recognition of her extraordinary service to the study of the English language.

She will be remembered by her friends and colleagues as a warm, incisive, and selfless scholar. Her kindness, generosity of spirit, and unshakeable dedication were matched only by her droll sense of humour. In 2005, in an interview, the Times Higher asked her “What has been your worst moment in university life?”. Christian instantly responded “The first time a student said, ‘You taught my mother.’"

In accordance with her wishes there will be no funeral. Later in the year a musical concert will be arranged as a memorial, and a symposium will be held to celebrate her life and work.

An appeal to endow an undergraduate prize in her memory can be found at: The Christian Kay Prize

Any donations would be warmly welcomed.