Andrew is Apprentice of the Year 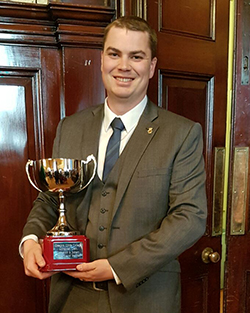 Andrew is 28 and comes from Bearsden. He began his apprenticeship with the University three years ago. Although he has now completed his training programme, he still faces final exams next Spring. Then he will become a fully qualified joiner and carpenter.

This is the first time he has picked up the Apprentice of the Year award, but in previous years he has won prizes for his work in first and second year studies. He has also been nominated for an award given by the Scottish Building Apprenticeship and Training Council.

Andrew told Campus e-News: 'Obviously I'm very happy with the award and have had to put a lot of extra work in over the year to achieve it. I'm very grateful for the support I have received from all my collegues at the UofG's Estates and Buildings during the last three years. They have helped train me and have given me ample time and opportunity to practice my trade.'

Barry Morton, Head of Operations for Estates and Buildings, expressed his delight at the news. He said: 'It's especially pleasing for me that our apprenticeship programme is being recognised as a success. Andrew continues to be great ambassador for the department’.