A student-developed app which aims to help users broaden their social or professional circles is being given a boost at Holyrood today. 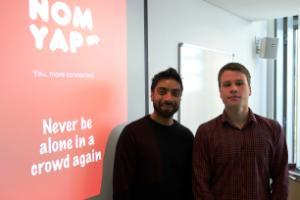 om Yap is the brain-child of School of Computing Science students Omar Tufayl and Justinas Bikulcius.

Nom Yap is getting a soft launch later this month with a bigger public and media push early in the New Year.

Omar and Justinas have already won a Dragon’s Den-style University event when they pitched their idea to a panel of judges which included successful Scottish entrepreneurs and early-stage investors.

This evening Omar will be attending a Universities Scotland event at the Scottish Parliament aimed at highlighting the work of young, University entrepreneurs and inventors. Called Making it Happen, the special guest for the evening will be the Cabinet Secretary for Education, and UofG alumna, Angela Constance MSP, a UofG graduate. Omar will get the chance of two hours of networking with MSPs to share the story-so-far of Nom Yap.

NomYap is a social app bringing people together who don’t know each other. It enables people looking to broaden their social or professional circles to meet and eat by sharing details of their interests, location and availability through the app.

The app will be marketed to students in the first instance as large, rich and diverse communities with a shared location. The app will be monetised through local eateries and venues advertising themselves and their promotions to the app’s user community, and NomYappers who decide to get together.

Several other University enterprises and innovations will also be on show at Holyrood.

Dr Jillian Gordon, Lecturer in Management at the Adam Smith Business School, said; "Tonight's event has an emphasis steered by Universities Scotland specifically on undergraduate entrepreneurship education. This is the reason we are invited and why we are showcasing our honours Business Start-Up course.

"We are also using the opportunity to showcase our summer company scheme supported by Santander, which is aimed at undergraduate students. One of this year's student businesses from the summer company scheme - MindMate- went on to win the very high profile Converge Competition and they will be on our stall too to demonstrate their product.

"This particular business should be of great interest to MSPs as it has a product aimed at Alzheimer sufferers and there has already been interest from the NHS. This is a big success story for the University for our student business to win a national business start up competition."